Mean squared error of an estimator

The mean squared error (MSE) of an estimator is a measure of the expected losses generated by the estimator.

We will always assume, unless stated otherwise, that the parameter to be estimated is a vector.

Let be an unknown parameter to be estimated.

An estimator of , denoted by , is a pre-defined rule that produces an estimate of for each possible sample we can observe.

In other words, is a random variable, influenced by sampling variability, whose realizations are equal to the estimates of .

Since the estimator is random, we can compute the expected value of the loss

which is called statistical risk.

Definition Let be an estimator of an unknown parameter . When the squared error

is used as a loss function, then the risk

is called the mean squared error of the estimator .

In this definition, is the Euclidean norm of a vector, equal to the square root of the sum of the squared entries of the vector.

When is a scalar, the squared error is

because the Euclidean norm of a scalar is equal to its absolute value.

The following decomposition is often used to distinguish between the two main sources of error, called bias and variance.

where is the trace of the covariance matrix of and

is the bias of the estimator, that is, the expected difference between the estimator and the true value of the parameter.

Suppose the true parameter and its estimator are column vectors. Then, we can write: 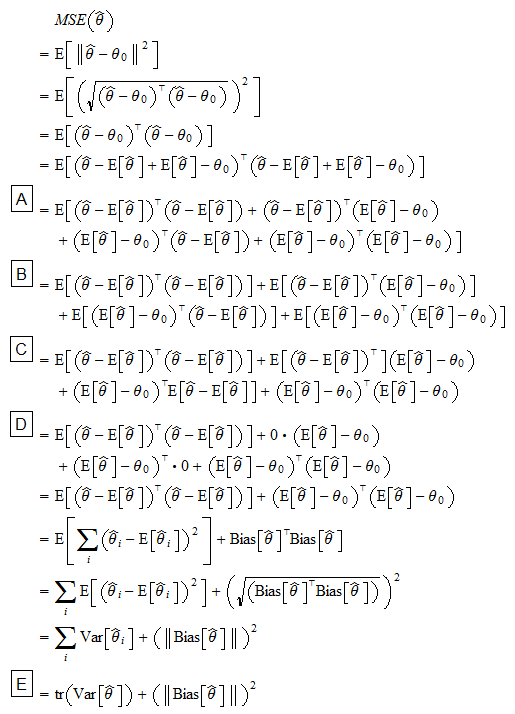 When the parameter is a scalar, the above formula for the bias-variance decomposition becomes

Thus, the mean squared error of an unbiased estimator (an estimator that has zero bias) is equal to the variance of the estimator itself.

In the lecture on point estimation, you can find more details about:

In the lecture on predictive models, you can find a different definition of MSE that applies to predictions (not to parameter estimates).