The score test, also known as Lagrange Multiplier (LM) test, is a hypothesis test used to check whether some parameter restrictions are violated.

A score test can be performed after estimating the parameters by maximum likelihood (ML).

The score test is used to deal with null hypotheses of the following kind:where:

As explained in this introductory lecture, all the most common null hypotheses and parameter restrictions can be written in the form .

Example If has two entries and , and the null hypothesis is , thenThere are parameters and tested restrictions.

The score test is based on the solution of the constrained maximum likelihood problemwhere:

Thus, the parameter estimate satisfies all the tested restrictions.

Another way to write the score statistic

A popular estimator of the asymptotic covariance matrix is the so-called Hessian estimator:whereis the Hessian (i.e., the matrix of second partial derivatives of the log-likelihood with respect to the parameters).

If we plug this estimator in the above formula for the score statistic, we obtain:

Many sources report this formula, but bear in mind that it is only a particular implementation of the LM test. If we use different estimators of the asymptotic covariance matrix, we obtain different formulae.

In order to derive the asymptotic properties of the statistic , the following assumptions will be maintained:

Asymptotic distribution of the test statistic

The Lagrange Multiplier statistic converges to a Chi-square distribution.

Proposition Provided that some technical conditions are satisfied (see above), and provided that the null hypothesis is true, the statistic converges in distribution to a Chi-square distribution with degrees of freedom.

Now, where is a vector of Lagrange multipliers. Thus, we have that

Solving for , we obtain

Now, the score statistic can be written as

By putting together everything we have derived so far, we can write the score statistic as a sequence of quadratic forms whereand But in the lecture on the Wald test, we have proved that such a sequence converges in distribution to a Chi-square random variable with a number of degrees of freedom equal to .

In the score test, the null hypothesis is rejected if the score statistic exceeds a pre-determined critical value , that is, if

The size of the test can be approximated by its asymptotic valuewhere is the distribution function of a Chi-square random variable with degrees of freedom.

We can choose so as to achieve a pre-determined size, as follows:

Here is an example of how to perform a Lagrange Multiplier test.

Let the parameter space be the set of all -dimensional vectors, that is, .

Denote the entries of the true parameter by and .

Suppose that we want to test the restriction

In this case, the function is a function defined by

We have that and the Jacobian of iswhose rank is equal to .

Note that the Jacobian does not depend on .

We then maximize the log-likelihood function with respect to (keeping fixed at ).

Suppose that we obtain the following estimates of the parameter and of the asymptotic covariance matrix:where is the sample size.

Suppose also that the value of the score is

Then, the score statistic is 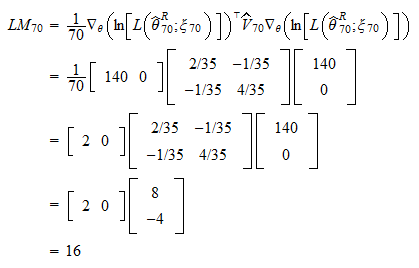 The statistic has a Chi-square distribution with degrees of freedom.

Suppose that we want the size of our test to be .

Then, the critical value iswhere is the cumulative distribution function of a Chi-square random variable with degree of freedom.

The value of can be calculated with any statistical software (we did it in MATLAB, using the command chi2inv(0.99,1)).

Thus, the test statistic exceeds the critical valueand we reject the null hypothesis.