Norm of a vector

The norm is a function, defined on a vector space, that associates to each vector a measure of its length. In abstract vector spaces, it generalizes the notion of length of a vector in Euclidean spaces.

There is a tight connection between norms and inner products, as every inner product can be used to induce a norm on its space.

Before reading this lecture you should be familiar with inner products and with the basics of the algebra of complex vectors and matrices.

We are going to give an abstract, axiomatic definition of norm. Later we will show some examples of norm to clarify its meaning.

be a vector space. A norm on

that associates to each

a positive real number, denoted by

, which has the following properties.

These properties are pretty intuitive.

As the norm is a measure of the length of a vector, it is reasonable to require that it should always be a positive number.

The definiteness property imposes that all vectors except the zero vector should have a strictly positive length.

, then its length is re-scaled accordingly.

Finally, in the triangle inequality,

is to be interpreted as the side of a triangle, while

Every inner product induces a norm

Before providing some examples of normed vector spaces, we need to introduce an important connection between inner products and norms.

be a vector space and

an inner product on

is called an induced norm on

We will prove that an induced norm indeed satisfies all the properties of a norm. But before doing that, we need to prove some preliminary results.

We highly recommend reading the proofs of the next three propositions as not only they are very short and simple to understand, but also they are a good way to hone our skills in dealing with norms and inner products.

In order to understand the following generalization of the well-known Pythagoras' theorem, we need to remember that two vectors are said to be orthogonal if and only if their inner product is equal to zero.

The proof is as follows:

we have used the additivity of the inner product; in step

we have used the orthogonality of

we have used the definition of induced norm.

Pythagoras' theorem says that the squared length of the hypotenuse (

). The triangle is right because we assume orthogonality (a 90 degrees angle) between the two sides

Given two vectors, we can always write the first as a scalar multiple of the second plus a third vector orthogonal to the second.

, then there exist a scalar

It suffices to verify the first equality:

and the second one:

we have used the additivity and homogeneity in the first argument of the inner product; in step

we have used the definition of induced norm.

The inequality presented in the next proposition is known as Cauchy-Schwarz inequality.

. For any two vectors

and, as a consequence, the inequality holds. We can thus focus on the case in which

. In this case, we can use the orthogonal decomposition shown in the previous section:

. Thanks to the orthogonality of

, we can apply Pythagoras' theorem:

, the equality just derived implies that

which becomes, by taking square roots on both sides,

If we multiply both sides by

, we obtained the desired inequality.

A couple of things to remember about complex numbers

We now have almost all the tools that we need to prove that a norm induced by an inner product indeed satisfies all the properties of a norm.

We just need to remember a couple of facts about complex numbers.

First, if we add to a complex number

is the so-called real part of the complex number.

Second, the modulus of

Proof that the induced norm is indeed a norm

We are now good to go!

be a vector space and

an inner product on

. Then, the norm induced by the inner product

is a norm on

Let us first prove positivity and definiteness. For any

, by the positivity of inner products, we have that

and by the definiteness of inner products, we have that

is defined over the complex field

we have used the homogeneity in the first argument of the inner product; in step

is the complex conjugate of

denotes the modulus of

. Absolute homogeneity holds also when the vector space is over the real field

in that case, so that

is the absolute value of

. Finally, let us prove the triangle inequality. For any 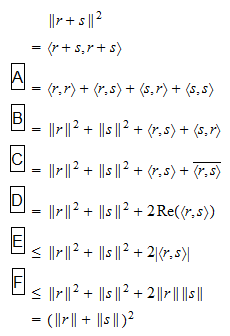 we have used the additivity of the inner product in its two arguments; in step

we have used the definition of induced norm; in step

we have used the conjugate symmetry of the inner product; in step

we have used the elementary properties of complex numbers discussed in the previous section; in step

we have used the Cauchy-Schwarz inequality. By taking the square root of both sides of the inequality derived above, we obtain

Example: the norm of a real array

Wow! This was a long sequence of theoretical facts without ever presenting a single example. The wait was worthwhile because we can now make examples involving norms induced by inner products, which are the most practically relevant in linear algebra.

real vectors (on the real field

is the transpose of

The norm induced by this inner product is

Thus, the norm of a real vector is equal to the square root of the sum of the squares of its entries. This is the ordinary way to compute the length of a vector in Euclidean space. 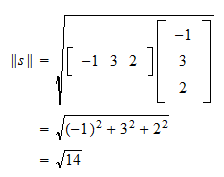 Example: the norm of a complex array

Another important example is the norm of a

complex vectors (on the complex field

was defined to be

is the conjugate transpose of

are the complex conjugates of the

The norm induced by this inner product is

where we have used the fact that the modulus

is equal to the square root of

Thus, the formula for the norm of a complex vector is not very different from the formula for real vectors: we just need to replace the absolute values of the entries of the vector with their moduli. 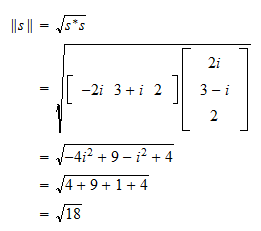 is positive since it is the sum of positive terms

. It is definite because

if and only if

, which happens if and only if

. Absolute homogeneity is satisfied because

Note that for any couple of real numbers

Therefore, for any two vectors

so that the triangle inequality holds. Thus, all the properties of a norm are satisfied.

. It is definite because

if and only if

, which happens if and only if

. Absolute homogeneity is satisfied because

Note that given two real numbers

For any couple of vectors

so that the triangle inequality holds. Thus, all the properties of a norm are satisfied.