A probability space is a triple , where is a sample space, is a sigma-algebra of events and is a probability measure on .

Elements of a probability space

The three building blocks of a probability space can be described as follows:

Suppose that the probabilistic experiment consists in extracting a ball from an urn containing two balls, one red () and one blue ().

The sample space is

A possible sigma-algebra of events iswhere is the empty set.

The four events could be described as follows:

A possible probability measure on is

How are the three building blocks of a probability space defined?

The first one, the sample space , is a primitive concept, loosely defined as the set of all possible outcomes of the probabilistic experiment.

The other two building blocks are instead defined rigorously, by enumerating the properties (or axioms) that they need to satisfy.

Let be a set whose elements are subsets of . Then, is a sigma-algebra if and only if it satisfies the following axioms:

It is possible to prove that these axioms imply:

Let be a function that associates a real number to each element of the sigma-algebra . Then, is a probability measure if and only if it satisfies the following axioms:

Why do we impose all these axioms?

Basically, it is for historical reasons and mathematical convenience.

By using the axioms as a definition, Kolmogorov was able to develop a theory of probabilities that was logically coherent and without mathematical flaws.

Since then, this definition has been productively used by generations of statisticians, who have built myriads of incredibly useful results upon Kolmogorov's theory.

If it is the first time that you see these axioms, the best strategy to approach them is to memorize them and then convince yourself that they are reasonable. The next sections will help you to do so.

Explanation of the axioms of a sigma-algebra

Let us start from sigma-algebras.

As we have said, the sigma-algebra contains all the subsets of to which we wish to assign probabilities.

So, the first thing to keep in mind is that we do not necessarily need to assign a probability to each possible subset of .

Example Suppose that the sample space is the unit interval:Define

You can easily check that is a sigma-algebra, by verifying that it satisfies the three axioms. It contains very few subsets of . However, if we are interested in the probability of the event , we do not need anything more complicated. Clearly, we can build more complex sigma-algebras. For example, the smallest sigma-algebra that contains the interval is

A widely used sigma-algebra is the Borel one, which contains all the open subintervals of .

Let us now turn to the three defining axioms. 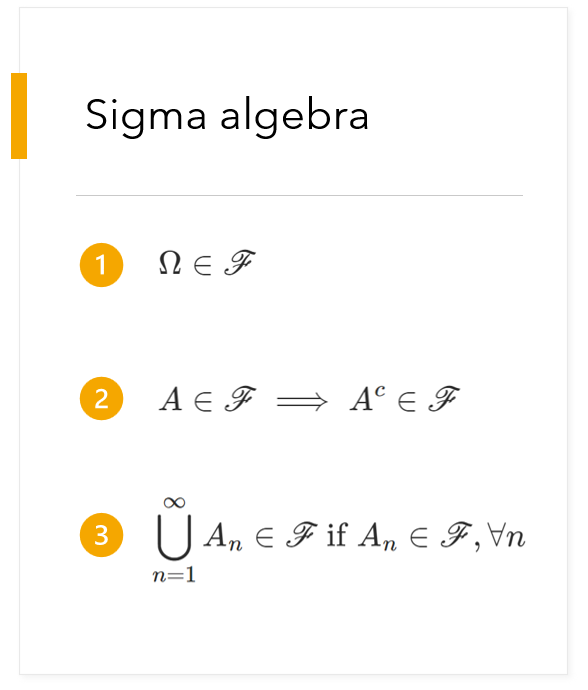 Axiom 1 means that we should always be allowed to speak of the trivial event "something will happen".

In fact, by setting we obtain

Explanation of the axioms of a probability measure

As we have said, a probability measure attaches a real number (a probability) to each event in the sigma-algebra. 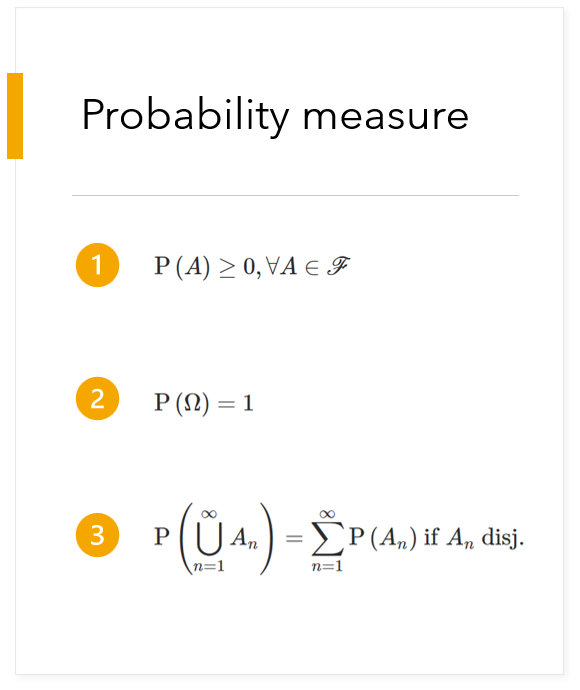 Axioms 1 and 2 are established arbitrarily: we simply decide, in line with a centuries-old tradition, that a probability is a positive number smaller than or equal to 1, and that the probability of the sure event is 1.

According to Axiom 3 (called countable additivity), the sum of the probabilities of some disjoint events must be equal to the probability that at least one of those events will happen (their union).

The lecture on the mathematics of probability contains a more detailed explanation of the concept of probability space and of the properties that must be satisfied by its building blocks.