In statistics and machine learning, a loss function quantifies the losses generated by the errors that we commit when:

The minimization of the expected loss, called statistical risk, is one of the guiding principles in statistical modelling.

Suppose that we use some data to produce an estimate of the unknown vector .

In general, there is a non-zero differencebetween our estimate and the true value, called estimation error.

Of course, we would like estimation errors to be as small as possible. But how do we formalize this preference?

We use a functionthat quantifies the losses incurred because of the estimation error, by mapping couples to the set of real numbers.

Typically, loss functions are increasing in the absolute value of the estimation error and they have convenient mathematical properties, such as differentiability and convexity.

An example (when is a scalar) is the quadratic loss

After we have estimated a linear regression model, we can compare its predictions of the dependent variable to the true values.

Given the regressors , the prediction of is

The differencebetween the prediction and the true value is called prediction error.

As in the case of estimation errors, we have a preference for small prediction errors. We formalize it by specifying a loss functionthat maps couples to real numbers.

Most of the functions that are used to quantify prediction losses are also used for estimation losses.

The expected value of the loss is called risk.

When is seen as an estimator (i.e., a random variable whose realization is equal to the estimate), the expected valueis the risk of the estimator.

The other relevant quantity is the risk of the predictionswhich can be approximated by the empirical risk, its sample counterpart:where is the sample size.

In a linear regression model, the vector of regression coefficients is usually estimated by empirical risk minimization.

The Ordinary Least Squares (OLS) estimator of is the empirical risk minimizer when the quadratic loss (details below) is used as the loss function.

In fact, the OLS estimator solves the minimization problem 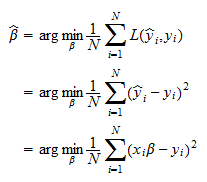 Under the conditions stated in the Gauss-Markov theorem, the OLS estimator is also the unbiased estimator that generates the lowest expected estimation losses, provided that the quadratic loss is used to quantify the latter.

What we have said thus far regarding linear regressions applies more in general to:

In other words, given a parametric statistical model, we can always define a loss function that depends on parameter estimates and true parameter values.

Given a predictive model, we can use a loss function to compare predictions to observed values.

We will always use the notation, but most of the functions we present can be used both in estimation and in prediction.

It is important to note that we can always multiply a loss function by a positive constant and/or add an arbitrary constant to it. These transformations do not change model rankings and the results of empirical risk minimization. In fact, the solution to an optimization problem does not change when the said transformations are performed on the objective function.

The most popular loss function is the quadratic loss (or squared error, or L2 loss).

When is a scalar, the quadratic loss is

When is a vector, it is defined aswhere denotes the Euclidean norm.

When the loss is quadratic, the expected value of the loss (the risk) is called Mean Squared Error (MSE).

The quadratic loss is immensely popular because it often allows us to derive closed-form expressions for the parameters that minimize the empirical risk and for the expected loss. This is exactly what happens in the linear regression model discussed above.

This kind of behavior makes the quadratic loss non-robust to outliers.

The absolute loss (or absolute error, or L1 loss) is defined aswhen is a scalar and as when is a vector.

When the loss is absolute, the expected value of the loss (the risk) is called Mean Absolute Error (MAE).

Unlike the quadratic loss, the absolute loss does not create particular incentives to reduce large errors, as only the average magnitude matters.

For example, according to the absolute loss, we should be indifferent between Configuration 1 and 2 below. An increase in the magnitude of a large error is acceptable if it is compensated by an equal decrease in an already small error.

The absolute loss has the advantage of being more robust to outliers than the quadratic loss.

However, the absolute loss does not enjoy the same analytical tractability of the quadratic loss.

For instance, when we use the absolute loss in linear regression modelling, and we estimate the regression coefficients by empirical risk minimization, the minimization problem does not have a closed-form solution. This kind of approach is called Least Absolute Deviation (LAD) regression. You can read more details about it on Wikipedia.

The Huber loss is defined as

where is a positive real number chosen by the statistician (if the errors are expected to be approximately standard normal, but there are some outliers, is often deemed a good choice).

In a sense, it tries to put together the best of both worlds (L1 and L2). Indeed, empirical risk minimization with the Huber loss function is optimal from several mathematical point of views in linear regressions contaminated by outliers. 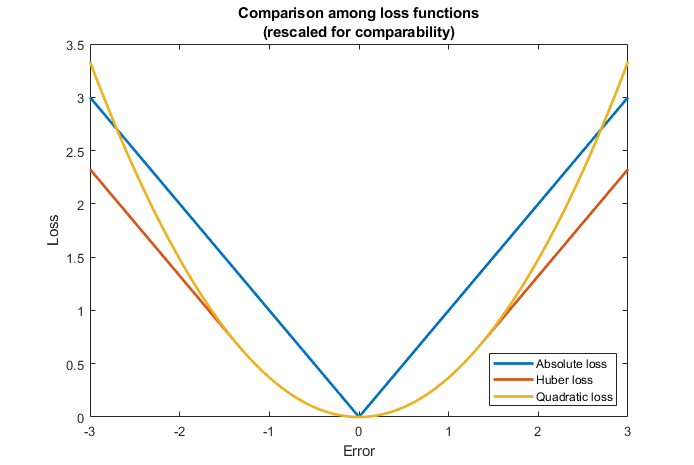 There are several other loss functions commonly used in linear regression problems. For example:

Other loss functions are used in classification models, that is, in models in which the dependent variable is categorical (binary or multinomial).

The most important are:

More details about loss functions, estimation errors and statistical risk can be found in the lectures on Point estimation and Predictive models.