The Metropolis-Hastings algorithm is one of the most popular Markov Chain Monte Carlo (MCMC) algorithms.

Like other MCMC methods, the Metropolis-Hastings algorithm is used to generate serially correlated draws from a sequence of probability distributions. The sequence converges to a given target distribution. 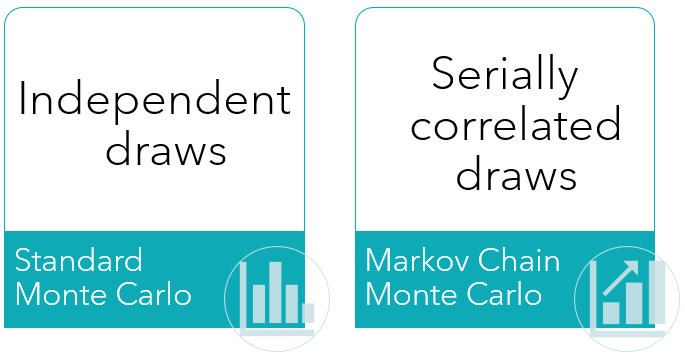 Before reading this lecture, you should review the basics of Markov chains and MCMC.

In particular, you should keep in mind that an MCMC algorithm generates a random sequence having the following properties:

When we run an MCMC algorithm for periods, we obtain an MCMC sample made up of the realizations of the first terms of the chain:

Then, we use the empirical distribution of the sample to approximate the target distribution.

Denote by a family of conditional distributions of our choice, from which it is easy to generate draws.

The vectors , and the argument of all have the same dimension.

The Metropolis-Hastings algorithm starts from any value belonging to the support of the target distribution. The value can be user-defined or extracted from a given distribution.

Then, the subsequent values are generated recursively.

In particular, the value at time step is generated as follows:

Since is uniform, that is, the probability of accepting the proposal as the new draw is equal to .

The following terminology is used:

If for any value of and , then we say that the proposal distribution is symmetric.

In this special case, the acceptance probability isand the algorithm is called Metropolis algorithm.

This simpler version of the algorithm was invented by Nicholas Metropolis.

We do not give a fully rigorous proof of convergence, but we provide the main intuitions.

The crucial step is to prove that the so-called detailed balance condition holds (see Markov chains), which implies that the target distribution is the stationary distribution of the Markov chain generated by the Metropolis-Hastings algorithm. 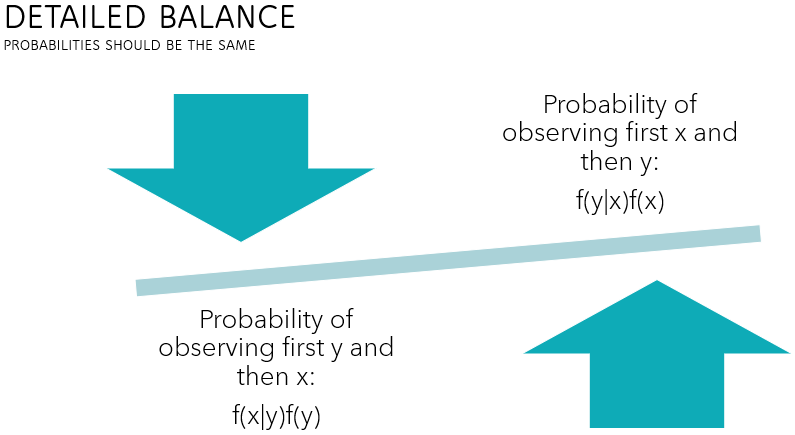 Denote by the transition kernel of the Markov chain, that is, the probability density of a transition from to .

When , then and we have

Symmetrically, when the transition is from to and , we have

Therefore, when , the target density and the transition kernel of the chain satisfy the detailed balance condition

When , then the detailed balance condition is trivially satisfied because and

By putting together the two cases ( and ), we find that the detailed balance condition is always satisfied. As a consequence, is the stationary distribution of the chain.

When we proved the detailed balance condition, we omitted an important detail: the proposal distribution must be able to generate all the values belonging to the support of the target distribution.

From a technical viewpoint, if a value belongs to the support of the target distribution but is never extracted from the proposal distribution, then , which causes division by zero problems in the proof of the detailed balance condition and makes it invalid.

Denote by the support of the target density .

A simple condition that guarantees that all the values belonging to can be generated as proposals is that for any two values .

For a discussion of this condition (and other minor technical conditions that are always satisfied in practice) see Robert and Casella (2013).

As already shown in the introductory lecture on MCMC methods, one of the main advantages of the Metropolis-Hastings algorithm is that we need to know the target distribution only up to a multiplicative constant.

This is very important in Bayesian inference, where the posterior distribution is often known up to a multiplicative constant (because the likelihood and the prior are known but the marginal distribution is not).

Suppose thatwhere is a known function but the constant is not.

Then, the acceptance probability is

So, we do not need to know the constant to compute the acceptance probability, and the latter is the only quantity in the algorithm that depends on the target distribution .

Therefore, we can use the Metropolis-Hastings algorithm to generate draws from a distribution even if we do not fully know the probability density (or mass) of that distribution!

For example, a common choice is to extract proposals from a multivariate normal distribution (each draw is independent from the previous ones).

When is drawn independently, the acceptance probability is

It is easy to see that when for any .

The consequence is that the chain remains stuck at particular points for long periods of time, giving rise to a highly serially correlated MCMC sample.

As discussed in the lecture on MCMC diagnostics, chains that produce highly correlated samples can be problematic because they need to be run for very long periods of time, which can be prohibitively costly.

Therefore, the proposal distribution should be as similar as possible to the target distribution, so as to get high acceptance probabilities and samples with low serial correlation.

In the following plot, we show two examples: 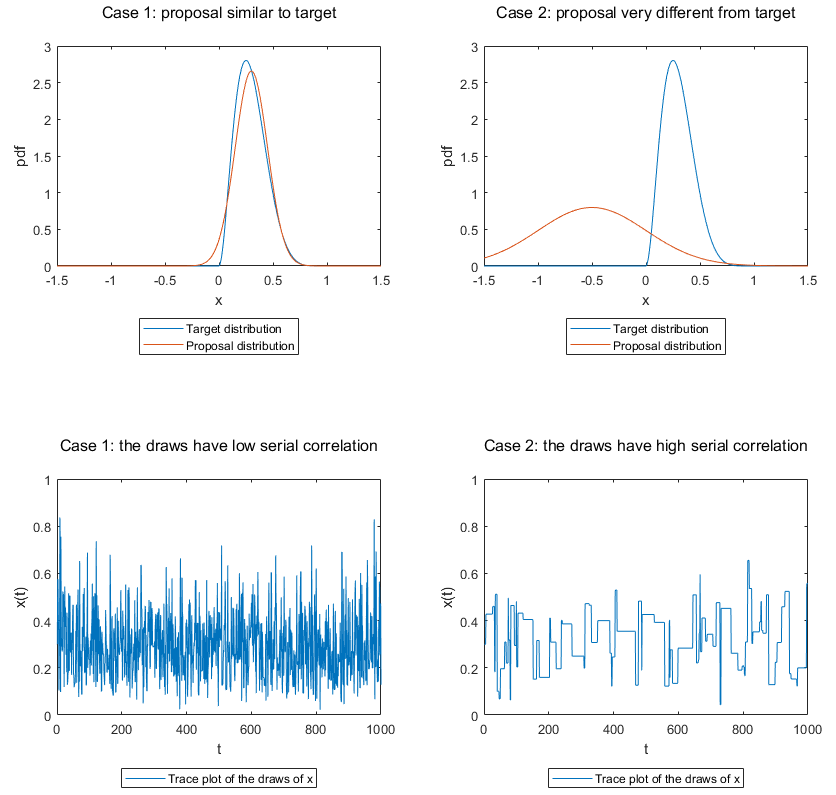 How to choose a proposal distribution

Unfortunately, there is no simple and universal method to select good proposal distributions. In fact, this is a topic that is still actively researched by statisticians.

However, a generally valid strategy is to:

If the proposals are formed aswhere is a sequence of independent draws from a known probability distribution (e.g., multivariate normal), then the algorithm is called Random walk Metropolis-Hastings.

Therefore, the acceptance probability is

Properties of the algorithm

To understand the properties of this algorithm, let us consider the special (but very common in practice) case in which the distribution of the random walk increment is symmetric.

In this case, , and the acceptance probability is

Suppose also that the target density has the following two characteristics (which are very common in practice too):

The bottom line is: we get a highly correlated sample both if the variance of the increments is too large and if it is too small. 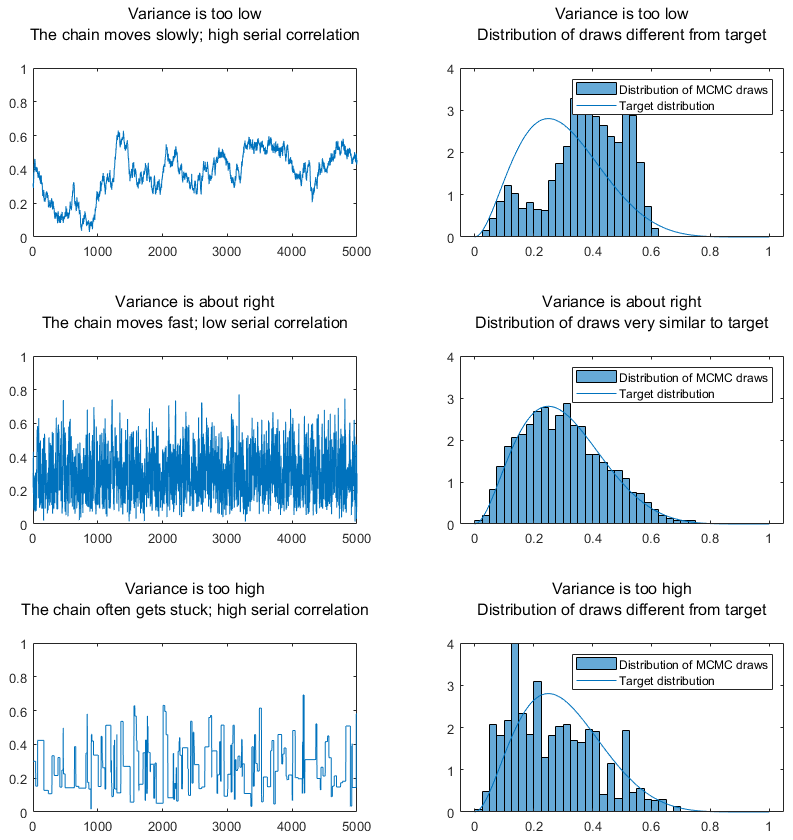 Tuning the variance of the increments

To avoid these two extreme cases, it is very important to accurately tune the variance of the random walk increments.

We can do this, for example, with a trial-and-error process:

An alternative and very effective method is to automatically tune the variance while running the chain.

Methods to do so are called adaptive Metropolis-Hastings methods. We do not discuss them here, but you can read this nice introduction if you are interested in the topic.