How the distribution is derived

In previous lectures we have explained that:

A Wishart random matrix with parameters and can be seen as a sum of outer products of independent multivariate normal random vectors having mean 0 and covariance matrix .

At the bottom of this page you can find a brief review of some basic concepts in matrix algebra that will be helpful in understanding the remainder of this lecture.

Definition Let be a continuous random matrix. Let its support be the set of all symmetric and positive definite real matrices:

Let be a symmetric and positive definite matrix and . We say that has a Wishart distribution with parameters and if its joint probability density function is

and is the Gamma function.

The parameter needs not be an integer, but, when is not an integer, can no longer be interpreted as a sum of outer products of multivariate normal random vectors.

Relation to the multivariate normal distribution

The following proposition provides the link between the multivariate normal distribution and the Wishart distribution.

The proof of this proposition is quite lengthy and complicated. The interested reader might have a look at Ghosh and Sinha (2002).

The expected value of a Wishart random matrix is

We do not provide a fully general proof, but we prove this result only for the special case in which is integer and can be written as(see subsection above). In this case, we have that 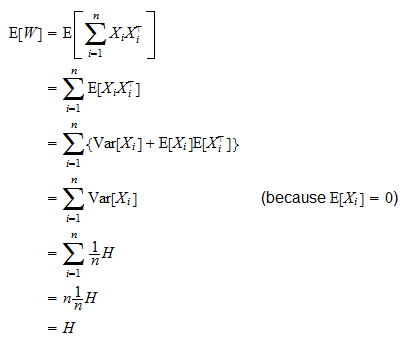 Since , the vectorization of , is a random vector, is a matrix.

It is possible to prove that

where denotes the Kronecker product and is the transposition-permutation matrix associated to (see the review of matrix algebra below for a definition).

The proof of this formula can be found in Muirhead (2005).

There is a simpler expression for the covariances between the diagonal entries of :

Again, we do not provide a fully general proof, but we prove this result only for the special case in which is integer and can be written as(see above). To compute this covariance, we first need to compute the following fourth cross-moment:where denotes the -th component () of the random vector (). This cross-moment can be computed by taking the fourth cross-partial derivative of the joint moment generating function of and and evaluating it at zero (see the lecture entitled Joint moment generating function). While this is not complicated, the algebra is quite tedious. I recommend doing it with computer algebra, for example utilizing the Matlab Symbolic Toolbox and the following four commands:

The result of the computations is

Using this result, the covariance between and is derived as follows: 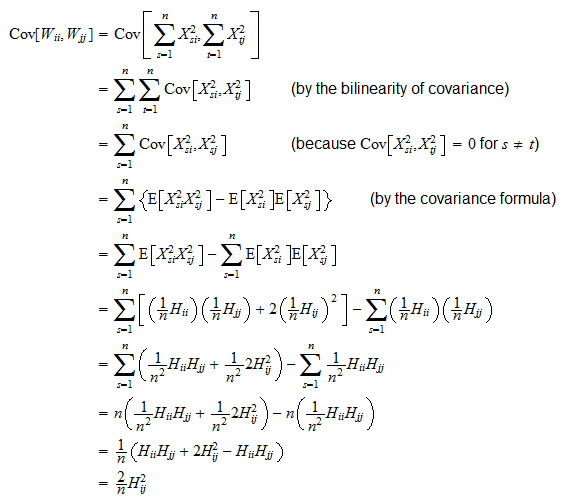 This section reviews some results from matrix algebra that are used to deal with the Wishart distribution.

If is a column vector, the outer product of with itself is the matrix obtained from the multiplication of with its transpose:

A matrix is said to be positive definite if and only if for any real vector such that .

The proof is by contradiction. Suppose a positive definite matrix were not invertible. Then would not be full rank, i.e. there would be a vector such thatwhich, premultiplied by , would yieldBut this is a contradiction.

Trace of a matrix

Let be a matrix and denote by the -th entry of (i.e. the entry at the intersection of the -th row and the -th column). The trace of , denoted by , is the sum of all the diagonal entries of :

Vectorization of a matrix

Given a matrix , its vectorization, denoted by , is the vector obtained by stacking the columns of on top of each other.

Example If is a matrixthe vectorization of is the random vector

Given a matrix and a matrix , the Kronecker product of and , denoted by , is a matrix having the following structure:

where is the -th entry of .