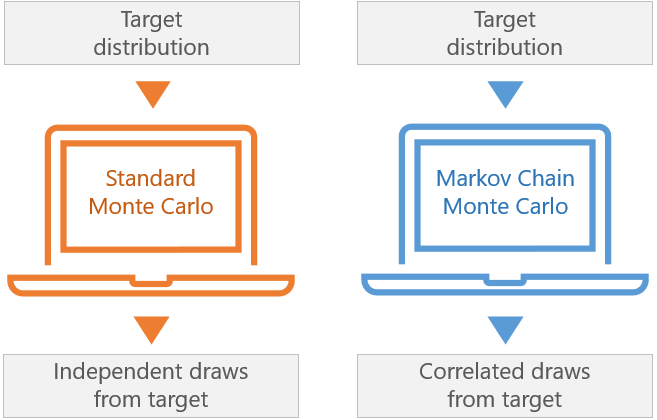 To understand MCMC, we need to be familiar with the basics of the Monte Carlo method.

We use the Monte Carlo method to approximate a feature of the probability distribution of a random variable (e.g., its expected value), when we are not able to work it out analytically.

With a computer, we generate a sample of independent draws from the distribution of .

Example If we need to calculate the probability that will be below some threshold, we approximate it with the fraction of observations in the computer-generated sample that are below the threshold.

This kind of procedure usually works well, in the sense that the approximation converges to the true quantity as the sample size increases. This is known as the plug-in principle.

MCMC methods work like standard Monte Carlo methods, although with a twist: the computer-generated draws are not independent, but they are serially correlated.

In particular, they are the realizations of random variables , ..., that form a Markov Chain.

You do not need to be an expert about Markov Chains to use MCMC methods. A basic understanding of the material in the following sections suffices, although we recommend reading our introductory lecture on Markov chains.

A random sequence is a Markov chain if and only if, given the current value , the future observations are conditionally independent of the past values , for any positive integers and .

This property, known as the Markov property, says that the process is memoryless: the probability distribution of the future values of the chain depends only on its current value , regardless of how the value was reached (i.e., regardless of the path followed by the chain in the past).

Thanks to the Markov property, we basically need only two things to analyze a chain:

Although this is not true in general of any Markov chain, the chains generated by MCMC methods have the following property:

This property implies that converges to as becomes large.

This is very important. We usually generate the first value of the chain () in a somewhat arbitrary manner, but we know that the distribution of the terms of the chain is less and less affected by our initial choice as becomes large. In other words, converges to the same distribution irrespective of how we choose .

In a chain generated by MCMC methods, not only converges to , but, as varies, the distributions become almost identical to each other. They converge to the so-called stationary distribution of the chain.

Moreover, the stationary distribution coincides with the target distribution, that is, the distribution from which we would like to extract a sample.

In other words, the larger is, the more and are similar to the target distribution. 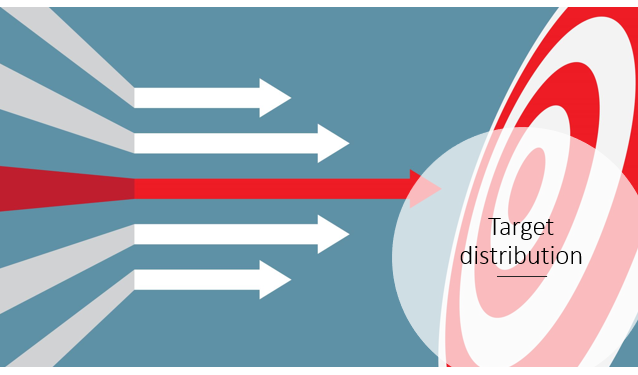 Let us summarize what we have said thus far.

We can imagine an MCMC algorithm as a black box that takes two inputs:

The output is a sequence of values .

Although the first values of the sequence are extracted from distributions that can be quite different from the target distribution, the similarity between these distributions and the target progressively increases: when is large, is drawn from a distribution that is very similar to the target. 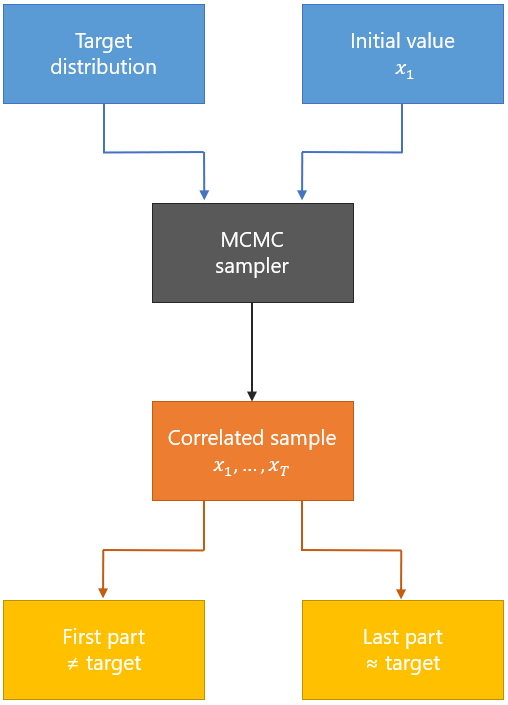 Because of the discrepancy between the target distribution and the distributions of the first terms of the chain, a common practice is to discard the first draws of an MCMC sample.

The set of draws that are discarded is called the burn-in sample.

This reduces the bias of any Monte Carlo approximation performed with the MCMC sample.

How to choose the size of the burn-in sample is discussed in the lecture on MCMC diagnostics.

After discarding a burn-in sample, we have a sample of draws from distributions that are very similar to the target.

However, we still have a problem: our draws are not independent.

What are the implications of the lack of independence?

To understand them, we need to go back to the standard Monte Carlo method.

The accuracy of a standard Monte Carlo simulation depends on the sample size : the larger is, the better the approximation.

Roughly speaking, the higher the correlation between adjacent observations, the smaller the effective sample size, and the less accurate the MCMC approximation is.

This is why in an MCMC simulation, most of the efforts are devoted to reducing the correlation as much as possible, so as to achieve a satisfactory effective sample size.

Our lecture on MCMC diagnostics discusses this point in detail.

One of the most popular MCMC algorithms is the Metropolis-Hastings (M-H) algorithm.

Denote by the density (or mass) function of the target distribution, that is, the distribution from which we wish to extract a sequence of draws.

For example, could be the posterior density in Bayesian inference.

Denote by a conditional distribution from which we are able to extract computer-generated samples (e.g., a multivariate normal distribution with mean ).

The generated sample , the value on which we condition, and the argument of the target distribution all have the same dimension.

The M-H algorithm starts from any value belonging to the support of the target distribution and generates the subsequent values as follows:

If some technical conditions are met, it can be proved that the distributions of the draws converge to the target distribution .

Furthermore, where is any function such that the expected value exists and is finite, and denotes almost sure convergence as tends to infinity.

In other words, a Strong Law of Large Numbers (an ergodic theorem) holds for the sample mean .

The main advantage of the algorithm

The power of the Metropolis-Hastings algorithm lies in the fact that you need to know the function only up to a multiplicative constant.

For example, in Bayesian inference it is very common to know the posterior distribution up to a multiplicative constant because the likelihood and the prior are known but the marginal distribution is not.

Suppose thatand we know but not .

Then, the acceptance probability in the M-H algorithm is

As a consequence, the acceptance probability, which is the only quantity that depends on , can be computed without knowing the constant .

This is the beauty of the Metropolis-Hastings algorithm: we can generate draws from a distribution even if we do not fully know the density of that distribution!

For more details, see the lecture on the Metropolis-Hastings algorithm.

Another popular MCMC algorithm is the so-called Gibbs sampling algorithm.

Suppose that we want to generate draws of a random vector having joint densitywhere are blocks of entries (or single entries) of .

Given a block , denote by the vector comprising all blocks except .

The Gibbs sampling algorithm starts from any vector belonging to the support of the target distribution and generates the subsequent values as follows:

In other words, at each iteration, the blocks are extracted one by one from their full conditional distributions, conditioning on the latest draws of all the other blocks.

It can be proved that Gibbs sampling is a special case of Metropolis-Hastings. Therefore, as in M-H, the distributions of the draws converge to the target distribution . Furthermore, an ergodic theorem for the sample means holds.

If you liked this lecture and you want to learn more about Markov Chain Monte Carlo methods, then we suggest that you read these two lectures: