The Wald test is a test of hypothesis usually performed on parameters that have been estimated by maximum likelihood (ML).

We assume that an unknown -dimensional parameter vector has been estimated by ML.

We want to test the null hypothesis that equations (possibly nonlinear) are satisfied:where is a vector valued function, with .

The lecture on hypothesis testing in maximum likelihood framework explains that the most common null hypotheses can be written in this form.

Let the parameter space be .

We assume that the following technical conditions are satisfied:

Let be the estimate of the parameter obtained by maximizing the log-likelihood over the whole parameter space :where is the likelihood function and is the sample.

We assume that the sample and the likelihood function satisfy some set of conditions that are sufficient to guarantee the consistency and asymptotic normality of (see the lecture on maximum likelihood for a set of such conditions).

Here is the formula for the test statistic used in the Wald test:

The asymptotic distribution of the test statistic

Asymptotically, the test statistic has a Chi-square distribution.

Proposition Under the null hypothesis that , the Wald statistic converges in distribution to a Chi-square distribution with degrees of freedom.

We have assumed that is consistent and asymptotically normal, which implies that converges in distribution to a multivariate normal random variable with mean and asymptotic covariance matrix , that is,Now, by the delta method, we have that

We have assumed that and are consistent estimators, that is,where denotes convergence in probability. Therefore, by the continuous mapping theorem, we have that

In the Wald test, the null hypothesis is rejected ifwhere is a pre-determined critical value.

where is the distribution function of a Chi-square random variable with degrees of freedom.

The critical value is chosen so as to achieve a pre-determined size, as follows:

This example shows how to use the Wald test to test a simple linear restriction.

Let the parameter space be the set of all -dimensional vectors:

Suppose that we have obtained the following estimates of the parameter and of the asymptotic covariance matrix:where is the sample size.

We want to test the restriction where and denote the first and second entries of .

Then, the function is a function defined by

The Jacobian of is

Note also that it does not depend on .

We can substitute these values in the formula for the Wald statistic: 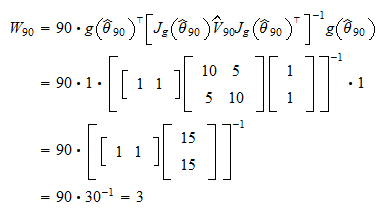 Our test statistic has a Chi-square distribution with degrees of freedom.

Suppose that we want our test to have size .

Then, our critical value is

where is the distribution function of a Chi-square random variable with degree of freedom.

The value of can be calculated with any statistical software (for, example, in MATLAB with the command chi2inv(0.95,1)).

Therefore, the test statistic does not exceed the critical valueand we do not reject the null hypothesis.