The orthogonal projection of a vector

onto a given subspace

that is closest to

Before explaining orthogonal projections, we are going to revise some important concepts.

be a vector space. Remember that two vectors

are orthogonal when their inner product is zero:

. The orthogonal complement of

, is the unique subspace satisfying

are complementary subspaces, which means that

denotes a direct sum. By the properties of direct sums, any vector

can be uniquely written as

We can now define orthogonal projections.

be a linear space. Let

with its unique decomposition

is called the orthogonal projection of

and it is denoted by

Thus, the orthogonal projection is a special case of the so-called oblique projection, which is defined as above, but without the requirement that the complementary subspace of

be an orthogonal complement.

be the space of

Its orthogonal complement is

as we can easily verify by checking that the vector spanning

is orthogonal to the two vectors spanning

The orthogonal projection minimizes the distance

The distance between two vectors is measured by the norm of their difference.

It turns out that

is the vector of

that is closest to

be a finite-dimensional vector space. Let

and, as a consequence, is orthogonal to any vector belonging to

we have used Pythagoras' theorem. By taking the square root of both sides, we obtain the stated result.

is the space of

is a subspace of

The projection matrix is

In the case of orthogonal projections, the formula above becomes simpler.

be the space of complex

be a matrix whose columns form a basis for

the conjugate transpose of

is the projection matrix such that

We choose the columns of

in such a way that they form an orthonormal basis for

. As a consequence, as explained in the lecture on unitary matrices (see the section on non-square matrices with orthonormal columns), we have

. Moreover, since the columns of

are orthogonal to the columns of

are linearly independent since they form a basis. Hence,

is full-rank (hence invertible). We use these results to derive the following equality: 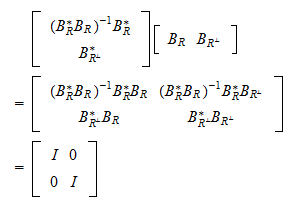 which implies, by the definition of inverse matrix, that

When we confine our attention to real vectors, conjugate transposition becomes simple transposition and the formula for the projection matrix becomes

which might be familiar to those of us that have previously dealt with linear regressions and the OLS estimator.

When the columns of the matrix

are orthonormal, we have a further simplification:

which is the formula for projections on orthonormal sets that we have already encountered in the lectures on the Gram-Schmidt process and on the QR decomposition.