An event is a subset of the set of all possible outcomes of a probabilistic experiment.

The concept of event is fundamental in probability theory. In fact, whenever we speak about probability, we explicitly or implicitly refer to the probability of an event.

The set of all possible outcomes is called sample space and it is usually denoted by .

Thus, an event is a subset of , which is indicated bywhere is the inclusion symbol.

If the probabilistic experiment is the roll of a die, the set of all possible outcomes is

In this setting, three instances of events are

The event could be described in words as "An odd number appears face up".

The event could be described as "A number strictly greater than four appears face up".

The event could be described as "The number appears face up".

In case you are wondering about the curly-bracket notation, you are strongly advised to revise the introductory lecture on set theory, where we explain how the notation is used. 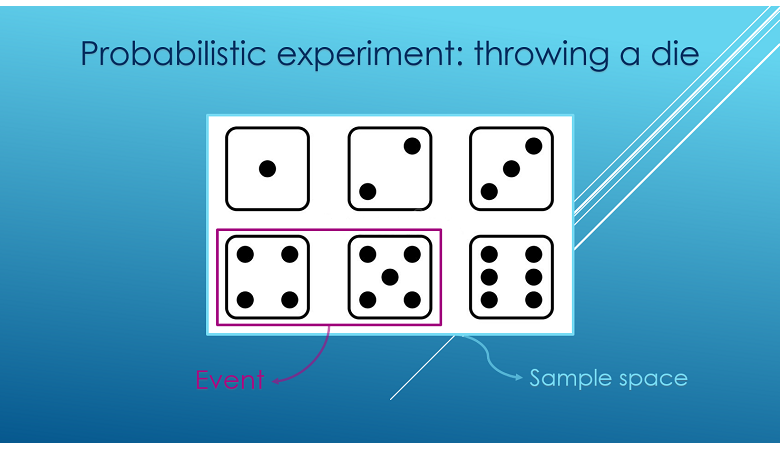 Probability of an event

In a probabilistic model, each event is assigned a probability , which measures how likely it is that will happen.

Example If, as in the above example, the probabilistic experiment is the roll of a die, we could have

In other words, the probabilities of the events and are one and two sixths, respectively.

There are some events that have special names.

A sure event is an event that always happens. It coincides with the set of all possible outcomes.

If we employ the same notation used above, is the sure event.

In the roll-of-a-die example, the sure event could be described in words as "Any one of the numbers from 1 to 6 appears face up".

An impossible event is an event that never happens. It coincides with the empty set .

You can find a careful discussion of this apparently strange definition in the glossary entry on impossible events.

When we compute probabilities, we often deal with the union of two or more events.

The union of two events and is itself an event. It comprises all the outcomes that belong to or to .

In the above example, we had

Then, the union of and , denoted by , is

The intersection of and is the event that comprises all the outcomes that belong both to and to .

If and are defined as above, then the intersection of and , denoted by , is

Two events are said to be mutually exclusive if their intersection is equal to the empty set.

For other examples and more detailed explanations of the concept of event, you can go to the lecture entitled Probability.