Let us start with a definition.

vector. The Householder matrix associated to

is the norm of

Let us immediately make an example, which will also help to revise norms and conjugate transposes.

Then, its conjugate transpose is

and its norm is

The elementary reflector associated to

A matrix is said to be Hermitian if it is equal to its conjugate transpose.

is Hermitian, that is,

The identity matrix is equal to its conjugate transpose and

is unitary, that is, 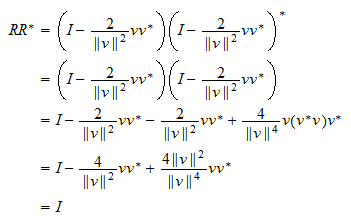 is the inverse of

A matrix is said to be involutory if it is equal to its inverse.

If we pre-multiply both sides of the equality by

which is remarkably symmetric with respect to the starting equation.

Suppose that we are given a

and we want to transform it into another vector

by using a reflector

Further suppose that we want the vector

to have all its entries equal to zero except for the first one. In other words, we want

to be proportional to the first vector of the standard basis:

How the aim is achieved

We can achieve the desired result by using the vector

to construct the reflector

is the first entry of the vector

For the time being, we assume that

is different from zero, an assumption which we will later relax.

We will show here the calculations for the case

The other case (with the minus sign before the ratio

) is demonstrated in a solved exercise at the end of this lecture.

Let us compute the two quantities

Thus, there is a considerable simplification:

so that our reflection becomes

We have achieved the desired result:

is proportional to the vector

, with coefficient of proportionality

Note that a complex number

can be written in exponential form as

is the argument of

Then, the ratio that appears in the formula for

can be written equivalently as

is a non-zero real number, then

Since we assume that

, how we define the function

as large as possible.

Until now, we have assumed that

, we can build the reflector using the vector

A solved exercise at the end of this lecture shows that this choice gives the desired result.

Other vectors of the canonical basis

We have discussed how to transform

into a vector proportional to

(the first vector of the canonical basis). If we want to transform

-th vector of the canonical basis), then we need to set

. The proof is analogous to the one we have already provided.

The Householder reflector analyzed in the previous section is often used to factorize a matrix into the product of a unitary matrix and an upper triangular matrix.

The factorization algorithm, which we illustrate below in detail, is called Householder reduction.

matrix and write it as a block matrix

As previously illustrated, we can construct a

that transforms the first column of

into a vector proportional to 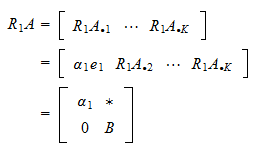 vector of possibly non-zero entries, and

We now construct a

that transforms the first column of

into a vector having the first entry equal to

and all the other entries equal to zero.

Then, we can build a

, being a reflector, is unitary. The first column of

has unit norm and it is orthogonal to all the other columns. Thus, 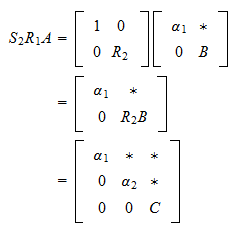 is a scalar and

is unitary because the product of unitary matrices is unitary.

We keep on constructing smaller reflectors

is an upper triangular matrix.

is unitary. Thus, the factorization of

The Householder matrix analyzed in this section is often used to construct algorithms for the QR decomposition that are numerically more stable than the Gram-Schmidt algorithm.

We are not going to discuss these algorithms, but we note that, in the Householder reduction process illustrated above, if

is real and full-rank, then we can always choose

in which case all the diagonal entries of

are strictly positive, and the factorization

Find what happens when the vector

is used to construct the Householder matrix.

Thus, we have the simplification

and the reflection becomes

Find what happens when

is used to construct the Householder matrix.

Thus, we have the simplification

and the reflection becomes