Joint cdf of X and Y

Let us start with the simple case in which we have two random variables and .

Their joint cdf is defined aswhere and are two real numbers.

In other words, the joint cdf gives the probability that two conditions are simultaneously true:

Suppose that there are only four possible cases:

Further assume that each of these cases has probability equal to 1/4.

Let us compute, as an example, the following value of the joint distribution function:

The two conditions that need to be simultaneously true are:

There are two cases in which they are satisfied:

The formula for discrete variables

In the previous example we have shown a special case.

In general, the formula for the joint cdf of two discrete random variables and is:

How to compute the formula with a table

The sum in the formula above can be easily computed with the help of a table.

Here is an example. 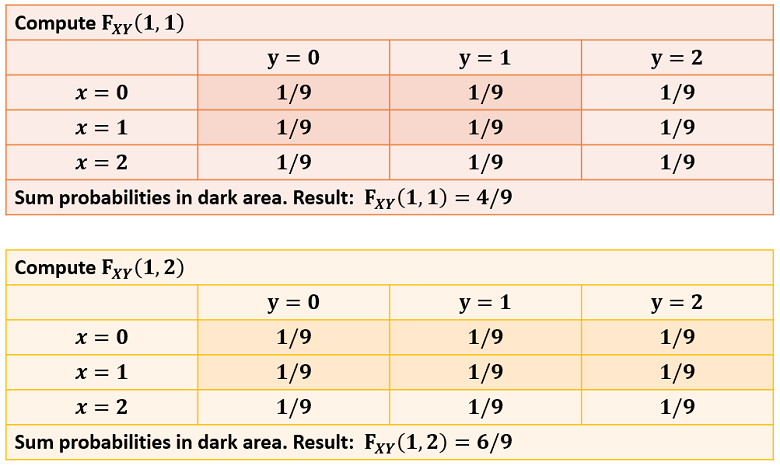 In this table, there are nine possible couples and they all have the same probability (1/9).

In order to compute the joint cumulative distribution function, all we need to do is to shade all the probabilities to the left of (included) and above (included).

Then, the value of is equal to the sum of the probabilities in the shaded area.

The formula for continuous variables

When and are continuous random variables, we need to use the formula

where is the joint probability density function of and .

The computation of the double integral can be broken down in two steps:

Let us make an example.

Let the joint pdf be

When and , we have 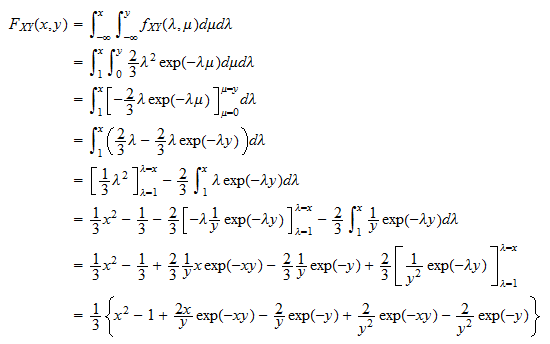 This is only one of the possible cases. We also have the two cases:

How to derive the marginal cdfs from the joint

The two marginal distribution functions of and are

They can be derived from the joint cumulative distribution function as follows:where the exact meaning of the notation is

This can be demonstrated as follows:

The proof for is analogous.

Deriving the joint cdf from the marginals

In general, we cannot derive the joint cdf from the marginals, unless we know the so-called copula function, which links the two marginals.

However, there is an important exception, discussed in the next section.

When and are independent, then the joint cdf is equal to the product of the marginals:

See the lecture on independent random variables for a proof, a discussion and some examples.

Definition The joint distribution function of a random vector is a function such that:

where the entries of and are denoted by and respectively, for .

More details about joint distribution functions can be found in the lecture entitled Random vectors.