Size of a test

In hypothesis testing, the size of a test is the (maximum) probability of committing a Type I error, that is, of incorrectly rejecting the null hypothesis when it is true.

Suppose that we are conducting a test about a parameter that can take any value in a parameter space .

The null hypothesis is that belongs to a given set :

Denote by the power function of the test.

For any , the function gives us the probability of rejecting the null hypothesis when the true parameter is :

Note that depends on:

The size of the test can be defined as follows.

Definition The size of the test, denoted by , is

Thus, we consider all the cases in which the null is true ().

For each case, we compute the probability of (incorrect) rejection.

The size is equal to the largest value we find (worst-case scenario).

When the null hypothesis is simple, that is, the set contains only one parameter (denote it by ), the above definition becomes

Thus, we have two cases:

Size vs level of significance

Many authors use the term level of significance as a synonym for size.

For many others, the level of significance is an upper bound to the size, that is, a constant that satisfies

Example - Size of a test for the mean

For example, suppose that we are testing the null hypothesis that the mean of a normal distribution is equal to .

The variance of the distribution, denoted by , is supposed to be known.

How the test is conducted

where is the sample mean:

We select a critical value and reject the null hypothesis if

How the size is derived

where is the cumulative distribution function of a standard normal random variable.

The size of the test is

By the symmetry of the standard normal distribution around 0, we have that

As a consequence, we can write the size of the test as

How to visualize the size

If you set, for example, , then you will reject the null in two cases:

But we know that if has a standard normal distribution, then

The following plot shows the probability density function of the z-statistic. 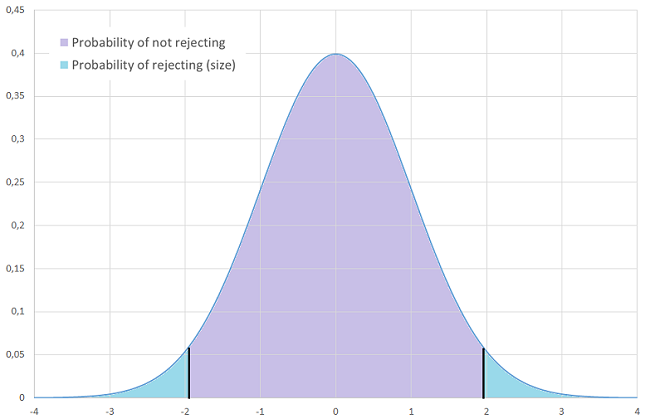 How to adjust the size of a test

In the previous example the size of the test was 5%. What if we want to decrease the size to 1%? How can this be achieved?

In the previous example, we can decrease the size of the test by increasing the critical value . In particular, note that implies

So, if our desired size is , then we need to search for what value the cumulative distribution function of the normal distribution is equal to .

By using normal distribution tables or a computer, we find that the desired value is .

As a consequence, the new critical value is

More details about the concept of size of a test can be found in the lecture entitled Hypothesis testing.