There are two different flavors of classification models:

The Multinoulli distribution is more general. It can be used to model outputs that can take two or more values. If the output variable can take different values, then it is represented as a Multinoulli random vector, that is, a random vector whose realizations have all entries equal to 0, except for the entry corresponding to the realized output value, which is equal to 1

Example If the output variable can belong to one of three classes (red, green or blue), then it can be represented as a Multinoulli random vector whose realizations are

We now introduce the main assumptions, the notation and the terminology we are going to use to present the basics of classification models.

We assume that a sample of data for is observed by the statistician. The output variables are denoted by , and the associated inputs, which are vectors, are denoted by .

We assume that there are functions , ..., such thatfor and . The conditional probability depends not only on the observed output but also on a vector of parameters .

Probabilities need to be non-negative and sum up to 1 (see Probability and its properties). As a consequence, the functions must be defined in such a way that

where is a vector of coefficients and is the logistic function defined byThus, conditional on , the output has a Bernoulli distribution with probability . Using the general notation proposed above and defining , we have:

It can easily be checked that the probabilities sum up to 1 for any and any .

where to each class corresponds a vector of coefficients . The vector of parameters isThus, conditional on , the output has a Multinoulli distribution with probabilities

The parameters of a multinomial classification model can be estimated by maximum likelihood. The likelihood of an observation can be written as

where is the -th component of the Multinoulli vector . Note that takes value 1 when the output variable belongs to the -th class and 0 otherwise. As a consequence, only one term in the product (the term corresponding to the observed class) can be different from 1. The latter fact is illustrated by the following example.

Example When there are two classes () and the output variable belongs to the second class, we have that the realization of the Multinoulli random vector isThe two components of the vector areand the likelihood is 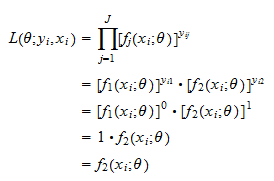 Denote the vector of all outputs by and the matrix of all inputs by . If we assume that the observations in the sample are IID, then the likelihood of the entire sample is equal to the product of the likelihoods of the single observations:

and the log-likelihood is

The maximum likelihood estimator of the parameter solves

In general, there is no analytical solution of this maximization problem and a solution must be found numerically (see the lecture entitled Maximum likelihood algorithm for a detailed explanation of how this can be done). Often, derivatives based algorithms are used (see the aforementioned lecture for an explanation). For several classification models (e.g., the multinomial logistic model introduced in the example above) the use of derivatives based algorithms is facilitated by the fact that the gradient (i.e., the vector of derivatives) of the functions with respect to can be computed analytically, which allows us to compute analytically also the gradient of the log-likelihood function by using the chain rule: