A sequence of random variables is covariance stationary if:

By relative position of two terms we mean how far apart they are located from each other in the sequence.

Instead, the absolute position refers to where they are located in the sequence. 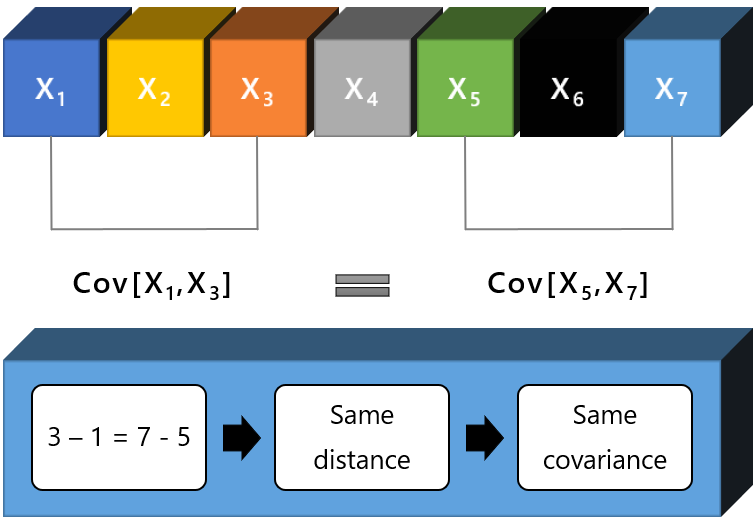 Often, we also use the term time series instead of sequence or process.

This is a formal definition.

which implies that a weakly stationary process has constant variance.

The definition above applies without modifications to sequences of random vectors.

In the case of a sequence of vectors, is a vector of expected values and is a matrix of covariances between the entries of the two vectors and (a cross-covariance matrix).

Let us make some examples.

The simplest example is the so called white noise process, a sequence that satisfies the following three conditions for any and :where is a positive constant.

Let be the white noise process of the previous example.

A first-order autoregressive process is a sequence whose terms satisfywhere is a constant and the recursion starts from a random variable uncorrelated with the terms of .

The expected values of the terms of the sequence are

For the process to be weakly stationary, the first condition that needs to be satisfied is

which is satisfied only if or . The latter possibility wil be ruled out below.

The variances remain finite as grows only if . Furthermore, the condition

is satisfied only ifwhich can be shown, for example, by solving

As proved in the lecture on autocorrelation, the covariance between any two terms of the sequence is

which satisfies the condition stated in the definition of weak stationarity (the covariance depends only on ).

Thus, the sequence is covariance stationary only if

A sequence is said to be strictly stationary if and only if and have the same joint distribution for any , and .

How covariance stationarity is used

The concept of covariance stationarity is often used in probability, statistics and time-series analysis.

Here are some examples:

Other concepts related to covariance stationarity can be found in the lecture on sequences of random variables.