Chebyshev's inequality is a probabilistic inequality. It provides an upper bound to the probability that the absolute deviation of a random variable from its mean will exceed a given threshold.

The following is a formal statement.

The proof is a straightforward application of Markov's inequality.

Since is a positive random variable, we can apply Markov's inequality to it:

By setting , we obtain

But if and only if , so we can write

Furthermore, by the very definition of variance,

Suppose that we extract an individual at random from a population whose members have an average income of $40,000, with a standard deviation of $20,000.

What is the probability of extracting an individual whose income is either less than $10,000 or greater than $70,000?

In the absence of more information about the distribution of income, we cannot compute this probability exactly. However, we can use Chebyshev's inequality to compute an upper bound to it.

The probability that this happens is:

Therefore, the probability of extracting an individual outside the income range $10,000-$70,000 is less than .

Chebyshev's inequality has many applications, but the most important one is probably the proof of a fundamental result in statistics, the so-called Chebyshev's Weak Law of Large Numbers.

Let be a random variable such that

Find a lower bound to its variance.

The lower bound can be derived thanks to Chebyshev's inequality: 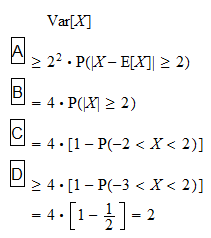 Thus, the lower bound is

Let be a random variable such that

Find an upper bound to the probability

We can solve this problem as follows: 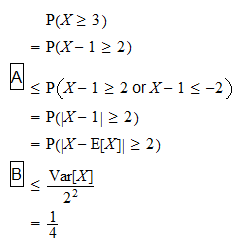 If you like this page, StatLect has other pages on probabilistic inequalities: 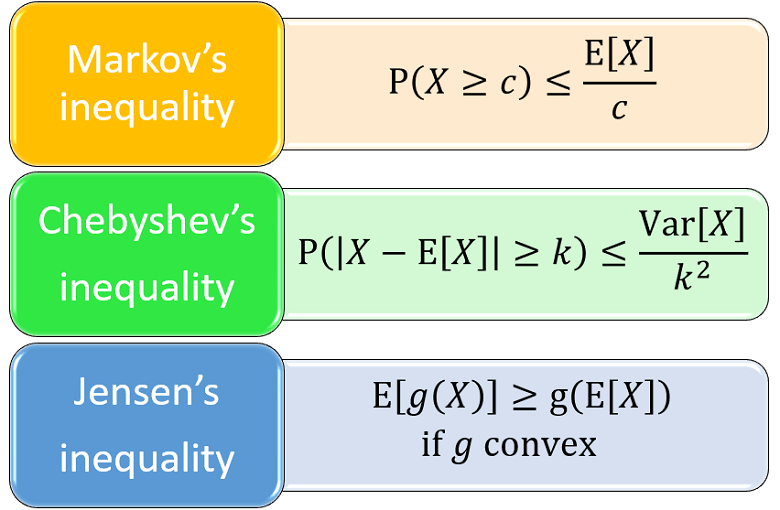