In this lecture we define and study some common properties of linear maps, called surjectivity, injectivity and bijectivity.

A map is said to be:

Before proceeding, remember that a function

associates one and only one element of

to each element of

for any two scalars

and any two vectors

is called the domain of

Other two important concepts are those of:

Let us start with a definition.

be a linear map. The transformation

is said to be surjective if and only if, for every

In other words, every element of

can be obtained as a transformation of an element of

is surjective, we also often say that

is a linear transformation from

Since the range of

is the set of all the values taken by

varies over the domain, then a linear map is surjective if and only if its range and codomain coincide:

be the linear map defined by the matrix product

In order to find the range of

the two entries of a generic vector 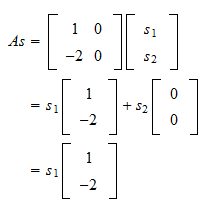 varies over the space

can take on any real value. Therefore, the range of

is the subspace spanned by the vector

More formally, we have that 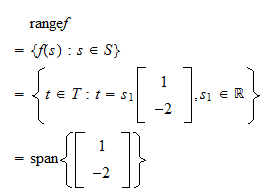 There are elements of

that do not belong to

. For example, the vector

does not belong to

because it is not a multiple of the vector

Since the range and the codomain of the map do not coincide, the map is not surjective.

Example If you change the matrix

in the previous example to

column vectors. In other words, the two vectors span all of

and the map is surjective.

We can now define injectivity.

be a linear map. The transformation

is said to be injective if and only if, for every two vectors

Thus, a map is injective when two distinct vectors in

always have two distinct images in

Note that, by an elementary rule of logic, if we take the above implication

and we negate it, we obtain the equivalent implication

Example As in the previous two examples, consider the case of a linear map induced by matrix multiplication. The domain

column vectors and the codomain

We can write the matrix product as a linear combination:

are the two entries of

. Thus, the elements of

. In particular, we have that

As a consequence, if

, the two vectors differ by at least one entry and their transformations through

also differ by at least one entry, so that

is injective. Note that

is not surjective because, for example, the vector

Example Modify the function in the previous example by setting

Therefore, we have found a case in which

. We can conclude that the map

We can determine whether a map is injective or not by examining its kernel.

is injective if and only if its kernel contains only the zero vector, that is,

The kernel of a linear map

always includes the zero vector (see the lecture on kernels) because

is injective. Then, there can be no other element

which proves the "only if" part of the proposition. Now, suppose the kernel contains only the zero vector. Take two vectors

Then, by the linearity of

This implies that the vector

belongs to the kernel. But we have assumed that the kernel contains only the zero vector. As a consequence,

We have just proved that

As previously discussed, this implication means that

is injective. The latter fact proves the "if" part of the proposition.

We conclude with a definition that needs no further explanations or examples.

is said to be bijective if and only if it is both surjective and injective.

As we explained in the lecture on linear maps, a linear function

is completely specified by the values taken by

on a basis for

be a basis for

be a basis for

is a member of the basis

, any element of the domain

can be written as

are scalars. Therefore, the elements of the range of

In other words, the elements of the range are those that can be written as linear combinations of

cannot be written as a linear combination of

because altogether they form a basis, so that they are linearly independent. Thus,

belongs to the codomain of

but not to its range. Therefore, codomain and range do not coincide. As a consequence, the function

Determine whether the function defined in the previous exercise is injective.

. Then, by the uniqueness of the representation in terms of a basis, we have that

are scalars and it cannot be that both 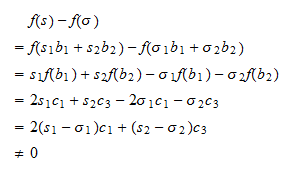 where we assert that the last expression is different from zero because: 1)

are members of a basis; 2) it cannot be that both

We have just proved that