The range null-space decomposition is the representation of a vector space as the direct sum of the range and the null space of a certain power of a given matrix.

Let us revise the concepts of range and null space of a matrix, which are discussed in detail in the lecture on the four fundamental subspaces.

The range (or column space) of

that is, the set of all values taken by the map as its argument varies over the domain

The null space of

formed by all the elements of

that are mapped into the zero vector.

Let us consider the powers

. In the lecture on matrix powers we have proved that

and its dimension decrease as we increase the power

and its dimension simultaneously increase. However, at a certain point the two subspaces stabilize: there exists an integer

, although sometimes the term has different meanings in the linear algebra literature.

The range null-space decomposition, which we are going to prove and discuss below, asserts that

is the index of

Remember that the sum of the two subspaces

is direct (and we use the

symbol to denote it) if and only if

in which case the representation of any vector

as a sum of a vector

Furthermore, when the direct sum is equal to the whole space

, as in the case of the range null-space decomposition, we say that the two spaces

contains only the zero vector.

be any non-negative integer such that

We can pre-multiply both sides of the equation by

because of the stabilization of null spaces. As a consequence,

was chosen arbitrarily, we can conclude that the intersection

contains only the zero vector.

After having revised all the concepts involved in the range null-space decomposition, we are now ready to state it as a proposition.

be any non-negative integer such that

We are going to use the following result, which we proved in the lecture on complementary subspaces:

are complementary if and only if

is a set of linearly dependent vectors. Then there are scalars

, not all equal to zero, such that

where the last inequality descends from the fact that

are sets of linearly independent vectors and the scalars are not all zero. But

This is impossible because, as demonstrated above,

contains only the zero vector. Thus, we have proved by contradiction that

is a set of linearly independent vectors. Moreover, by the rank-nullity theorem,

is a set of

linearly independent vectors. In other words, it is a basis for

were chosen arbitrarily among the bases of

respectively, it descends that

are complementary subspaces, that is,

When the decomposition is trivial

is full-rank for any non-negative integer

. In other words, the columns of

are always linearly independent, and, as a consequence, they span all of

, which makes the decomposition trivial.

is the identity matrix) and

. As a consequence, the index of a full-rank matrix is

The decomposition for operators

Remember that raising a matrix to the

-th integer power is the same as composing its associated operator

Thus, we can state the range null-space decomposition for linear operators as follows.

be a finite-dimensional vector space. Let

be a linear operator. Then, there exists a non-negative integer

Find the index of

and determine the range null-space decomposition of 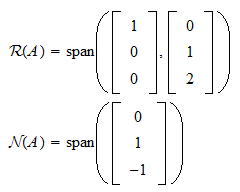 The second power of

from which we can clearly see that

Thus, the index of