is a random variable whose distribution is known.

, how do we derive the distribution of

is one-to-one (e.g., strictly increasing or strictly decreasing), there are formulae for the probability mass (or density) and the distribution function of

These formulae, sometimes called transformation theorems, are explained and proved in the lecture on functions of random variables.

Their generalization to the multivariate case (when 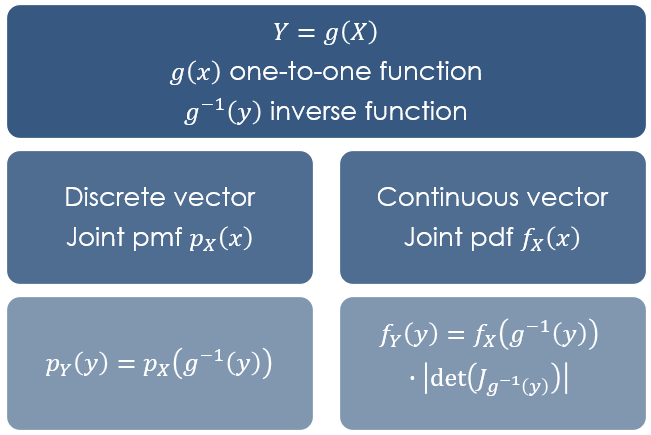 Law of the unconscious statistician

, we can nonetheless easily compute the expected value and other moments of

, thanks to the so-called Law Of the Unconscious Statistician (LOTUS).

The LOTUS, illustrated below, is also often called transformation theorem.

For discrete random variables, the theorem is as follows.

be a discrete random variable and

is the support of

is its probability mass function.

, unlike the standard formula

For continuous random variables, the theorem is as follows.

be a continuous random variable and

is the probability density function of

Again, the above formula does not require us to know the probability density function of

, unlike the standard formula

LOTUS for other moments

The LOTUS can be used to compute any moment of

, provided that the moment exists:

The mgf completely characterizes the distribution of

More details about the transformation theorem can be found in the following lectures:

Abadir, K.M. and Magnus, J.R., 2007. A statistical proof of the transformation theorem. The Refinement of Econometric Estimation and Test Procedures, Cambridge University Press.

Next entry: Type I error