Ridge regression is a term used to refer to a linear regression model whose coefficients are estimated not by ordinary least squares (OLS), but by an estimator, called ridge estimator, that, albeit biased, has lower variance than the OLS estimator.

In certain cases, the mean squared error of the ridge estimator (which is the sum of its variance and the square of its bias) is smaller than that of the OLS estimator.

Ridge estimation is carried out on the linear regression modelwhere:

Remember that the OLS estimator solves the minimization problemwhere is the -th row of and and are column vectors.

When has full rank, the solution to the OLS problem is

The ridge estimator solves the slightly modified minimization problemwhere is a positive constant.

Thus, in ridge estimation we add a penalty to the least squares criterion: we minimize the sum of squared residualsplus the squared norm of of the vector of coefficients

We will discuss below how to choose the penalty parameter .

The solution to the minimization problem iswhere is the identity matrix.

The objective function to minimize can be written in matrix form as follows:The first order condition for a minimum is that the gradient of with respect to should be equal to zero:that is,orThe matrixis positive definite for any because, for any vector , we havewhere the last inequality follows from the fact that even if is equal to for every , is strictly positive for at least one . Therefore, the matrix has full rank and it is invertible. As a consequence, the first order condition is satisfied byWe now need to check that this is indeed a global minimum. Note that the Hessian matrix, that is, the matrix of second derivatives of , isThus, the Hessian is positive definite (it is a positive multiple of a matrix that we have just proved to be positive definite). Hence, is strictly convex in , which implies that is a global minimum.

If you read the proof above, you will notice that, unlike in OLS estimation, we do not need to assume that the design matrix is full-rank. Therefore, the ridge estimator exists also when does not have full rank. 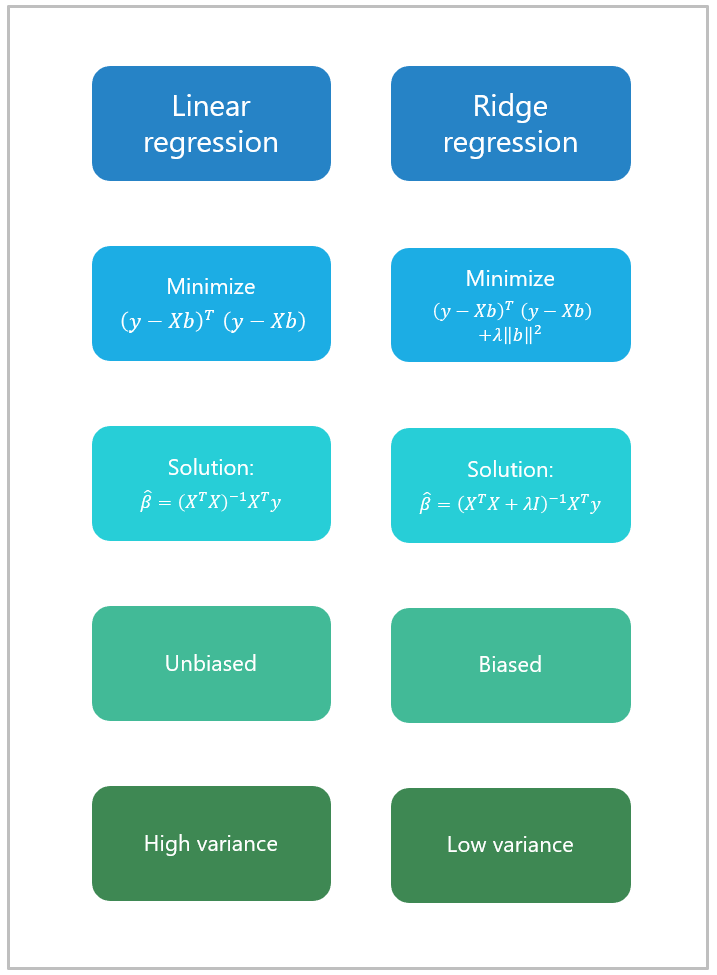 Bias and variance of the ridge estimator

In this section we derive the bias and variance of the ridge estimator under the commonly made assumption (e.g., in the normal linear regression model) that, conditional on , the errors of the regression have zero mean and constant variance and are uncorrelated:where is a positive constant and is the identity matrix.

The conditional expected value of the ridge estimator iswhich is different from unless (the OLS case).

The bias of the estimator is

We can write the ridge estimator asTherefore,

The covariance matrix of the ridge estimator is

In order to make a comparison, the OLS estimator must exist. As a consequence, must be full-rank. With this assumption in place, the conditional variance of the OLS estimator isNow, define the matrixwhich is invertible. Then, we can rewrite the covariance matrix of the ridge estimator as follows:

The difference between the two covariance matrices is 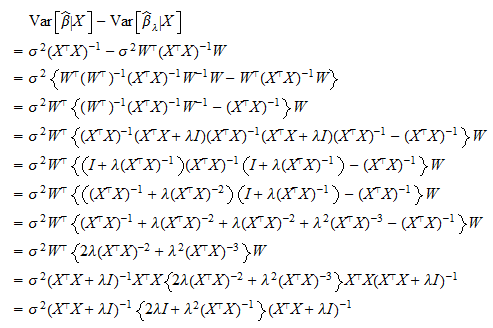 The mean squared error (MSE) of the ridge estimator is equal to the trace of its covariance matrix plus the squared norm of its bias (the so-called bias-variance decomposition):

The OLS estimator has zero bias, so its MSE is

The difference between the two MSEs is

where we have used the fact that the sum of the traces of two matrices is equal to the trace of their sum.

We have a difference between two terms ( and ). We have already proved that the matrixis positive definite. As a consequence, its trace (term ) is strictly positive.

The square of the bias (term ) is also strictly positive. Therefore, the difference between and could in principle be either positive or negative.

Thus, there always exists a value of the penalty parameter such that the ridge estimator has lower mean squared error than the OLS estimator.

This result is very important from both a practical and a theoretical standpoint. Although, by the Gauss-Markov theorem, the OLS estimator has the lowest variance (and the lowest MSE) among the estimators that are unbiased, there exists a biased estimator (a ridge estimator) whose MSE is lower than that of OLS.

How to choose the penalty parameter

We have just proved that there exists a such that the ridge estimator is better (in the MSE sense) than the OLS one.

The question is: how do find the optimal ?

The most common way to find the best is by so-called leave-one-out cross-validation:

In other words, we set equal to the value that generates the lowest MSE in the leave-one-out cross-validation exercise.

Our lecture on the choice of regularization parameters provides an example (with Python code) of how to choose by using a cross-validation method called hold-out cross-validation.

The ridge estimator is not scale invariant

A nice property of the OLS estimator is that it is scale invariant: if we post-multiply the design matrix by an invertible matrix , then the OLS estimate we obtain is equal to the previous estimate multiplied by .

For example, if we multiply a regressor by 2, then the OLS estimate of the coefficient of that regressor is divided by 2.

In more formal terms, consider the OLS estimate and the rescaled design matrix

The OLS estimate associated to the new design matrix is

Thus, no matter how we rescale the regressors, we always obtain the same result.

This is a nice property of the OLS estimator that is unfortunately not possessed by the ridge estimator.

Then, the ridge estimate associated to the rescaled matrix iswhich is equal to only ifthat is, only if

In other words, the ridge estimator is scale-invariant only in the special case in which the scale matrix is orthonormal.

The general absence of scale-invariance implies that any choice we make about the scaling of variables (e.g., expressing a regressor in centimeters vs meters or thousands vs millions of dollars) affects the coefficient estimates.

Since this is highly undesirable, what we usually do is to standardize all the variables in our regression, that is, we subtract from each variable its mean and we divide it by its standard deviation. By doing so, the coefficient estimates are not affected by arbitrary choices of the scaling of variables. 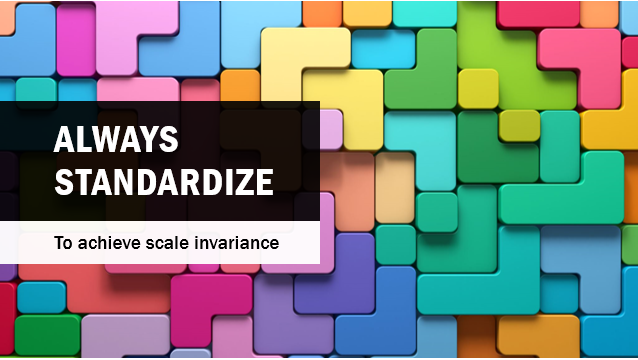