This lecture discusses the main properties of the Normal Linear Regression Model (NLRM), a linear regression model in which the vector of errors of the regression is assumed to have a multivariate normal distribution conditional on the matrix of regressors. The assumption of multivariate normality, together with other assumptions (mainly concerning the covariance matrix of the errors), allows us to derive analytically the distributions of the Ordinary Least Squares (OLS) estimators of the regression coefficients and of several other statistics.

The assumptions made in a normal linear regression model are:

Distribution of the OLS estimator

Under the assumptions made in the previous section, the OLS estimator has a multivariate normal distribution, conditional on the design matrix.

Proposition In a Normal Linear Regression Model, the OLS estimator has a multivariate normal distribution, conditional on , with mean and covariance matrix

First of all, note that

The fact that we are conditioning on means that we can treat as a constant matrix. Therefore, conditional on , the OLS estimator is a linear transformation of a multivariate normal random vector (the vector ). This implies that also is multivariate normal, with meanand variance

Note that means that the OLS estimator is unbiased, not only conditionally, but also unconditionally, because by the Law of Iterated Expectations we have that

The properties enjoyed by are summarized by the following proposition.

Proposition In a Normal Linear Regression Model, the adjusted sample variance of the residuals is a conditionally unbiased estimator of :Furthermore, conditional on , has a Gamma distribution with parameters and and it is independent of .

Denote by the vector of residuals. Remember from the previous proof that the OLS estimator can be written asAs a consequence, we have 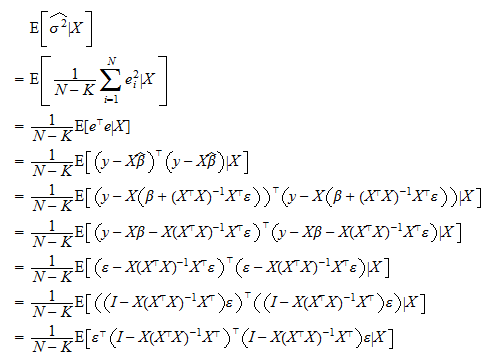 The matrixis clearly symmetric (verify it by taking its transpose). It is also idempotent because

Since the expected value of a Chi-square random variable is equal to its number of degrees of freedom, we have

Moreover, the fact that the quadratic form has a Chi-square distribution with degrees of freedom implies that the sample variancehas a Gamma distribution with parameters and (see the lecture on the Gamma distribution for a proof of this fact). To conclude, we need to prove that is independent of . Sinceandwe have that and are functions of the same multivariate normal random vector . Therefore, by standard results on the independence of quadratic forms involving normal vectors, and are independent if and are orthogonal. In order to check their orthogonality, we only need to verify that the product between and is zero:

Note that also in this case, the proposed estimator is unbiased not only conditionally, but also unconditionally because, by the Law of Iterated Expectations, we have that

Estimation of the covariance matrix of the OLS estimator

In practice, however, this quantity is not known exactly because the variance of the error terms, that is , is unknown. However, we can replace its unknown value with the estimator proposed above (the adjusted sample variance of the residuals), so as to obtain an estimator of the covariance matrix of :

This estimator is often employed to construct test statistics that allow us to conduct tests of hypotheses about the regression coefficients.