R squared of a linear regression

How good is a linear regression model in predicting the output variable on the basis of the input variables?

The R squared of a linear regression is a statistic that provides a quantitative answer to these questions. 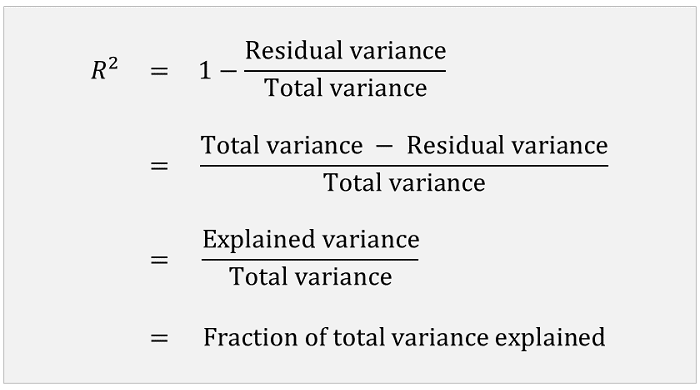 Before defining the R squared of a linear regression, we warn our readers that several slightly different definitions can be found in the literature.

Usually, these definitions are equivalent in the special, but important case in which the linear regression includes a constant among its regressors.

We choose a definition that is easy to understand, and then we make some brief comments about other definitions.

Suppose that we have a sample of observations , for .

Given an estimate of (for example, an OLS estimate), we compute the residuals of the regression:

Sample variance of the outputs

Denote by the unadjusted sample variance of the outputs:

where is the sample mean

Sample variance of the residuals

Denote by the mean of the squared residuals:

Unless stated otherwise, we are going to maintain the assumption that in what follows.

Intuitively, when the predictions of the linear regression model are perfect, then the residuals are always equal to zero and their sample variance is also equal to zero.

On the contrary, the less the predictions of the linear regression model are accurate, the highest the variance of the residuals is.

We are now ready to give a definition of R squared.

It is possible to prove that the R squared cannot be smaller than 0 if the regression includes a constant among its regressors and is the OLS estimate of (in this case we also have that ). Outside this important special case, the R squared can take negative values.

Another common definition of the R squared is

This definition is equivalent to the previous definition in the case in which the sample mean of the residuals is equal to zero (e.g., if the regression includes an intercept).

Check the Wikipedia article for other definitions.

instead of the unadjusted sample variances and .

This is done because and are unbiased estimators of and under certain assumptions (see the lectures on Variance estimation and The Normal Linear Regression Model).

The adjusted R squared can also be written as a function of the unadjusted sample variances:

This is an immediate consequence of the fact that

The ratioused in the formula above is often called a degrees-of-freedom adjustment.

Interpretation of the adjusted R squared

The intuition behind the adjustment is as follows.

When the number of regressors is large, the mere fact of being able to adjust many regression coefficients allows us to significantly reduce the variance of the residuals. As a consequence, the R squared tends to be small.

This phenomenon is known as overfitting. The extreme case is when the number of regressors is equal to the number of observations and we can choose so as to make all the residuals equal to .

The degrees-of-freedom adjustment allows us to take this fact into consideration and to avoid under-estimating the variance of the error terms.

More details about the degrees-of-freedom adjustment

In more technical terms, the idea behind the adjustment is that what we would really like to know is the quantitybut the unadjusted sample variances and are biased estimators of and .

The bias is downwards, that is, they tend to underestimate their population counterparts.

As a consequence, we estimate and with the adjusted sample variances and , which are unbiased estimators.