The singular value decomposition (SVD) of a matrix allows to decompose any (not necessarily square) matrix into a product of three terms:

Easily recognizable subsets of the columns of the two unitary matrices involved in the decomposition have the remarkable property of being orthonormal bases for the column space and the null space of the original matrix.

Here is the decomposition.

matrix. Then, there exist a

We start by observing that the matrix

is Hermitian (i.e., equal to its conjugate transpose), hence normal and unitarily diagonalizable (i.e., unitarily similar to a diagonal matrix). Moreover, for any

is positive semi-definite, which implies that its eigenvalues are real non-negative numbers. Thus, we can diagonalize

is a unitary matrix and

is a diagonal matrix such that its diagonal entries are real non-negative numbers. When we diagonalize a matrix, we can arbitrarily choose the order in which the eigenvalues appear on the diagonal of

. Therefore, we can perform the diagonalization in such a manner that

is a diagonal matrix having all the strictly positive eigenvalues of

on its main diagonal. Suppose that there are

strictly positive eigenvalues, that is,

. By using the rules for the multiplication of block matrices, we obtain 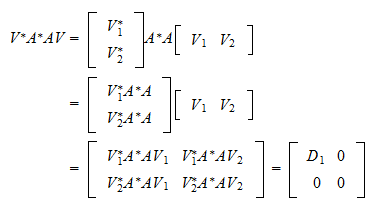 and the last equation implies

As a consequence, the squared norms of the columns of

(which are on the main diagonal of the matrix on the left-hand side of the equation) are all zero. Hence,

by the positive definiteness of the norm. Define the

so that the columns of

are orthonormal. Find any

having orthonormal columns and such that

In other words, the columns of

. Stated differently, the columns of

span the orthogonal complement of the span of the columns of

is a unitary matrix. Then, 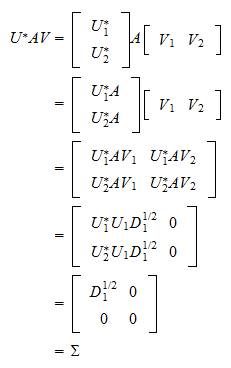 By pre-multiplying both sides by

and post-multiplying both sides by

The diagonal entries of

) are called singular values of

then the singular values are

Then, the singular values are

then the singular values are

As shown in the proof above, the singular value decomposition of

is obtained from the diagonalization of

A more compact form of the SVD, called compact SVD, can be obtained as follows.

. Then, there exist a

, both having orthonormal columns, such that

diagonal matrix with strictly positive entries on its main diagonal.

In this proof we use all the matrices defined in the above proof of the non-compact SVD. Note that

(i.e., the number of non-zero singular values) is the rank of

and, as a consequence, also the rank of

(because multiplication by the full-rank matrices

does not change the rank of

where we have defined

is real (i.e., all its entries are real numbers), then the SVD is

Remember that the column space

be an SVD of

entries on the main diagonal of

be the block formed by the first

The proof of this proposition is in Solved Exercise 1 below.

is the matrix appearing in the compact SVD above.

Since the columns of

are orthonormal, they are also linearly independent. Thus, the matrix

Remember that the null space

is the kernel of the linear transformation defined by

be an SVD of

entries on the main diagonal of

be the block formed by the last

is the null space of

The proof of this proposition is in Solved Exercise 2 below.

Prove the above proposition about the column space of

. Then, there exists an

where we have used the compact SVD of

. Then, there exists an

where again we have used the compact SVD of

Prove the above proposition about the null space of

together form a basis for the space of

vectors. As a consequence, there exist an

We can write the equation as

By pre-multiplying both sides of the equation by

, as previously demonstrated. But

are both full-rank, the last equation implies

which in turn implies

. We have just demonstrated that

. Hence, there exists a

By pre-multiplying both sides of the equation by