In the lecture on matrix polynomials we have explained that, if

is a field, such as the set of real numbers

or the set of complex numbers

is an ordinary polynomial

then we can use

to define, by extension, an analogous matrix polynomial

provided that the entries of the square matrix

belong to the field

Remember that the characteristic polynomial of a square matrix

are the eigenvalues of

As explained above, an ordinary polynomial

can be used to define a matrix polynomial

The proposition in the next section, known as Cayley-Hamilton theorem, shows that the characteristic polynomial of

Here is the Cayley-Hamilton theorem.

be the eigenvalues of

has a Schur decomposition

is an upper triangular matrix,

is a unitary matrix and

. Moreover, the diagonal entries of

are the eigenvalues of

We are going to show that

and, as a consequence,

We are going to prove by induction that the first

are zero (hence all the columns of

are zero and the proposition is true). Let us start from

is the only non-zero entry of the first column of

. Therefore, the first column of the matrix

is zero. Now suppose that the first

are zero, that is,

can be seen as linear combinations of the columns of

with coefficients taken from the corresponding columns of

we have used the fact that

is upper triangular and, as a consequence,

we have used the fact that the first

is one of the first

, then the summation is over an empty set of indices and

, then the summation is over a single index and

Thus, we have reached the desired conclusion: the first

are zero. It follows that all the columns of

is the characteristic polynomial of

Let us make an example.

The characteristic polynomial of 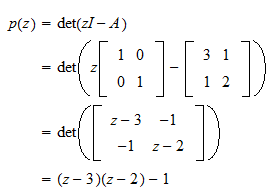 We can transform it into a polynomial in

Let us carry out the multiplications so as to check that indeed the Cayley-Hamilton theorem holds: 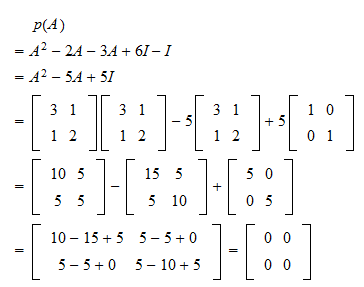 can be rewritten as a polynomial whose degree is at most

be a matrix polynomial in

. Then, there exists a polynomial

and the degree of

If the degree of

, then there is nothing to prove. If the degree of

is greater than or equal to

, we proceed as follows. By the Cayley-Hamilton theorem, we have

are obtained by expanding the product

can be expressed as a linear combination of powers of

If we pre-multiply both sides of the previous equation by

can be expressed as a linear combination of powers of

-th. With the same technique (pre-multiply and substitute), we obtain the same result for any power

is any positive integer. Thus, given a polynomial

of degree greater than or equal to

, we can substitute all the powers of

with lower powers. Hence, we have the stated result.

as a polynomial of degree

The characteristic polynomial of 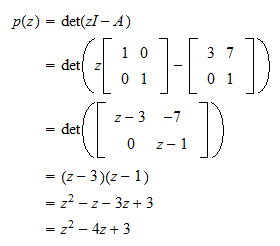 Therefore, by the Cayley-Hamilton theorem, we have

Finally, we can re-write the given polynomial