In Bayesian statistics, an uninformative (or non-informative) prior is a prior that has minimal influence on the inference. 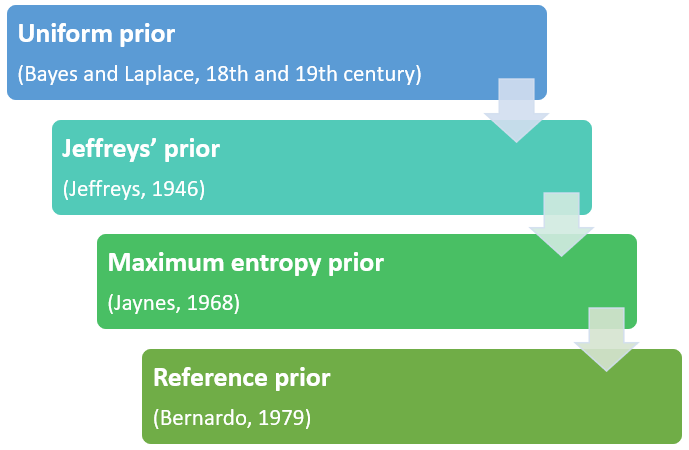 In Bayesian inference, we use the data (or evidence) to update a prior.

As a result, we obtain a posterior distribution that combines the information contained in the prior with that coming from the data.

If the contribution of the prior is negligible with respect to that provided by the data, then we say that the prior is uninformative.

Non-informative priors are the workhorse of objective Bayesian statistics.

In general, the prior reflects the statistician's subjective beliefs, as well as knowledge accumulated before observing the data.

However, there are many cases in which not only we have little prior knowledge, but we would also like not to rely on subjective beliefs.

This happens when scientific objectivity is at a premium (Lunn et al. 2013), for example, when:

Uninformative priors are used to make Bayesian inferences as objective as possible.

There is a heated debate between so-called "objective" and "subjective" Bayesian statisticians (e.g., Berger 2006).

Uninformative priors are at the center of the debate.

Some statisticians think that the term uninformative is misleading and a misnomer because all priors contain some information.

Others (e.g. Berger 2006) argue that, even if uninformative priors are not really uninformative, the statistical community largely considers them "default" or "conventional" priors that can be used when an objective analysis needs to be performed. In Kass and Wasserman's (1996) words:

"There is no objective, unique prior that represents ignorance. Instead, reference priors are chosen by public agreement, much like units of length and weight. In this interpretation, reference priors are akin to a default option in a computer package. We fall back to the default when there is insufficient information to otherwise define the prior."

We will briefly describe below the following classes of non-informative priors:

Since the earliest studies of Bayes and Laplace (see Fienberg 2006), there has been some agreement on the fact that one of the simplest ways to represent a state of ignorance about the value of a scalar parameter is to assign a uniform distribution to it.

Denote the set of possible values of (its support) by .

If is finite and it has elements, then the prior probability mass is

If is a closed interval of length , then the prior probability density is

In the other cases (e.g., infinite but countable support, or unbounded interval), the following improper uniform prior is often used:

In other words, is proportional to a constant.

An improper prior does not sum or integrate to . As such, it does not represent a proper probability distribution. However, in many interesting cases, it can be used, together with the likelihood of the observed data, as if it were a proper prior, to derive a proper posterior distribution.

What happens when we assign a uniform prior to and then we perform a re-parametrization, that is, we define a new parameter such that

where is an invertible function?

It may happen that has a non-uniform distribution.

Thus, the rule "always assign a uniform prior to the parameter" may produce inconsistent results. We may get two different priors for in the two cases in which

Jeffreys (1946) proposed a method to assign priors that is consistent under re-parametrization.

Suppose that the likelihood of a single observation is

Then, Jeffreys' prior is

where is the Fisher information

Wikipedia has a detailed article on Jeffreys' prior, which shows some of its advantages:

However, Jeffreys' prior is often improper, and its multivariate version may have paradoxical properties (Dawid et al. 1973). These are the two main reasons why other priors have been proposed in the literature.

He argued that the probability distribution which best represents a given state of knowledge can be found by maximizing the entropy of the distribution, subject to some constraints representing the available information.

Entropy is a measure of how "surprising" the realization of a random variable is, on average. The larger the entropy, the less information we have a priori.

If the support of the parameter is finite, the entropy is

Moreover, when is finite and there are no constraints (no prior information), entropy is maximized by assigning a uniform prior to (i.e., all the possible values of are equally likely).

When is not finite, we need to use a different definition of entropy (relative entropy) that requires us to define a base measure (often an arbitrary or subjective choice). The resulting prior can differ from a uniform prior.

The principle of maximum entropy has the advantage that it can be used to incorporate objective prior information by imposing constraints on the probability distribution of , without also introducing subjective views.

The starting idea is that the prior should influence the posterior as little as possible.

For this to happen, the posterior should be on average very different from the prior.

The difference between the posterior and the prior can be measured by the Kullback-Leibler divergence.

Therefore, a reference prior is derived by maximizing the expected value of the Kullback-Leibler divergence of the prior from the posterior.

In the univariate case, the reference prior turns out to be the same as Jeffreys' prior (e.g., Kaptein et al. 2022).

However, in the multivariate case, it often has better properties, as it does not generate the paradoxes generated by Jeffreys' prior.

The best way to learn about reference priors is to read the relevant chapter in the Handbook of Statistics (Bernardo 2005; freely available online).

Jeffreys, H., 1946. An invariant form for the prior probability in estimation problems. Proceedings of the Royal Society of London. Series A. Mathematical and Physical Sciences, 186(1007), 453-461.