Consider a scalar-valued function of a single variable, such as, for example, the exponential function or the sine function.

This lecture deals with the problem of defining such extensions in a useful manner.

Let be a field of scalars, such as the set of real numbers or the set of complex numbers .

We will consider functions and the problem of extending them is such a way thatis a well-defined output matrix, for any input matrix .

This extension, which has numerous applications, is straightforward and we do not need to discuss it further.

The element-wise extension has the problem that it is not compatible with the way in which we have defined matrix polynomials.

Remember that an ordinary polynomial is a function defined aswhere the coefficients also belong to the field of scalars .

The extension of to square matrices, which is called a matrix polynomial, is defined aswhere is a matrix and is the identity matrix.

In the definition of a matrix polynomial, the powers are matrix powers obtained by repeatedly multiplying by itself

As we know, multiplying two matrices is not the same as taking the element-wise products of their entries.

Properties that should be satisfied by a matrix function

We are now going to discuss some properties that should be satisfied by a sound definition of matrix function.

We have already said about the consistency with the definition of a matrix polynomial.

In the next sections we will discuss some properties that are desirable when:

Finally, we will provide a formal definition that satisfies all these desirable properties.

Note: since the next sections only serve as motivation for the definition of a matrix function, the discussion therein is not completely rigorous (e.g., possible issues about the convergence of infinite series are not analyzed rigorously).

Many interesting and useful functions are analytic, that is, they coincide with their (convergent) Taylor series:where:

Suppose that is analytic in a neighborhood of , so that the Taylor expansion above becomes

Further assume that is diagonalizable, that is, where is an invertible matrix and is a diagonal matrix whose diagonal entries are equal to the eigenvalues of , denoted by . 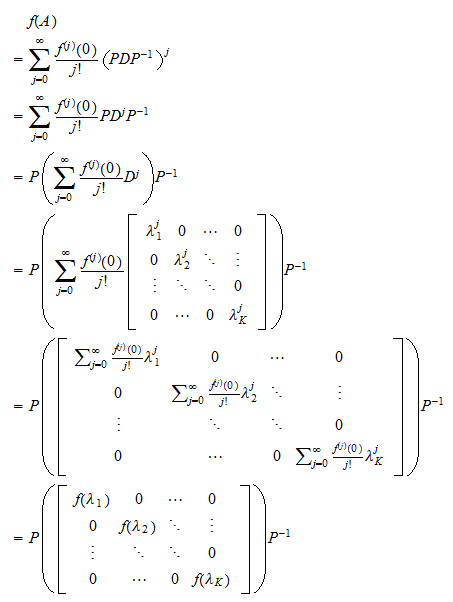 provided that the eigenvalues of are included in the neighborhood over which is analytic.

This derivation shows another property that a definition of matrix function should have: if has the diagonalization then where is obtained by applying to each diagonal entry of .

As in Higham (2008), we focus on Jordan blocks, which have the form

We can also writewhereis a nilpotent matrix.

Raising to integer powers moves the diagonal of s towards the upper-right corner:

When is analytic in a neighborhood of , its Taylor expansion can be written as:

By using the same technique, we can show that, for larger Jordan blocks , has a similar structure.

For example, if is , then

This kind of structure for is another property that our definition of a matrix function should satisfy.

Remember that a matrix is in Jordan form if it is block-diagonal and all its diagonal blocks are Jordan blocks:

where are Jordan blocks.

Then, if is analytic in a sufficiently large neighborhood of a point , we have 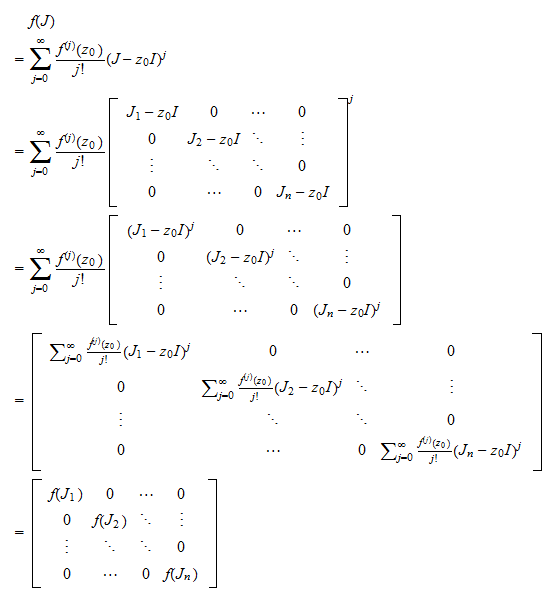 where can be computed as in the previous section.

Finally, any matrix is similar to a matrix in Jordan form:where is an invertible matrix.

Therefore,where has been derived above.

After this long motivating discussion, we are ready to provide the standard definition of a matrix function.

Definition Let be a matrix having distinct eigenvalues . Letbe a Jordan decomposition of , where is a matrix in Jordan form, with Jordan blocks . Denote by the dimension of the largest Jordan block having eigenvalue . Let be a scalar function. Suppose thatexists for any and any . Then, the matrix function is defined as

where, for a Jordan block having dimension and eigenvalue , is defined as

Since the Jordan decomposition of a matrix is not unique, this definition makes sense only as long as does not depend on which decomposition we pick. A proof of the lack of of this kind of dependence can be found, for example, in Meyer (2000).

Clearly, this definition satisfies the properties that we have outlined in the motivating discussion about Jordan blocks and matrices in Jordan form.

Moreover, if is diagonalizable and its eigenvalues are , then , is diagonal, the Jordan blocks have dimension , and 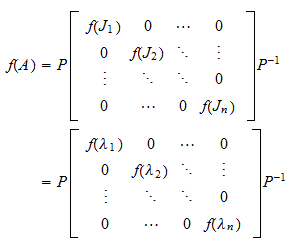 This is the property previously outlined in the section about diagonalizable matrices.

The last thing to note is that is not required to be analytic in the definition above. However, it is possible to prove the following property, which completes the list of desirable properties put forward in our motivating discussion.

Proposition Suppose that is analytic in a neighborhood of a point , and that the neighborhood includes all the eigenvalues of . Let be as in the standard definition above. Then,

Application to systems of differential equations

The definition of a matrix function we have just provided has several useful applications. One of them is to solve linear systems of differential equations.

Let be a vector whose entries are functions of time.

The -th derivative of with respect to is denoted by

Suppose that satisfies the linear system of differential equationswith initial condition , where is a matrix and is a vector.

By repeatedly differentiating both sides of the equation with respect to , we obtain

Thus, an analytic solution of the system of differential equations can be worked out as follows:

By using the theory developed above, we can re-write the solution aswhere the scalar function is easily recognized to be the exponential function:

If is diagonalizable as and the two eigenvalues on the diagonal of are and , thenand the solution of the system of differential equations is

If is not diagonalizable, it has the Jordan decomposition

Then,and the solution of the system of differential equations is

Compute by using the definition of a matrix function.

The matrix is already in Jordan form. It has two Jordan blocksThe scalar function is extended to the matrix as follows:

Find the solution of the system of differential equationswith initial condition

Since is already in Jordan form, the solution is 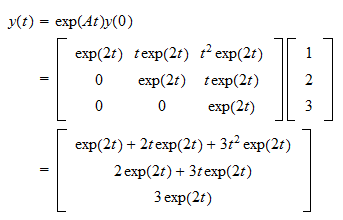