Let be an vector.

The Discrete Fourier Transform of is another vector whose entries satisfywhere is the imaginary unit.

We can use the DFT to obtain the frequency-domain representation

To derive the DFT of the sine and cosine functions, we will use the following properties.

For any angle , we have

Since the period of the trigonometric functions is , we havefor any integer and any angle .

DFT of a cosine wave with integer frequency

Let us start from a cosine wave:where .

The number of cycles per samples (frequency) is assumed to be a positive integer less than .

The cosine wave can be written as

which implies that its Discrete Fourier Transform is 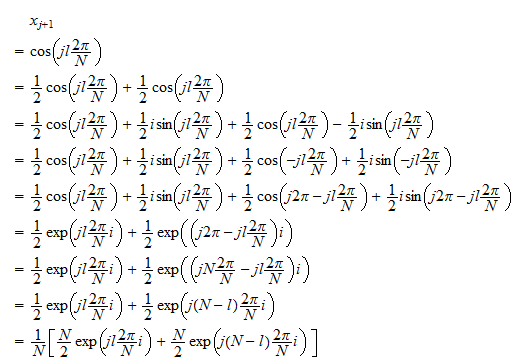 DFT of a sine wave with integer frequency

The number of cycles per samples is again assumed to be a positive integer less than .

The sine wave can be written as

which implies that the Discrete Fourier Transform is 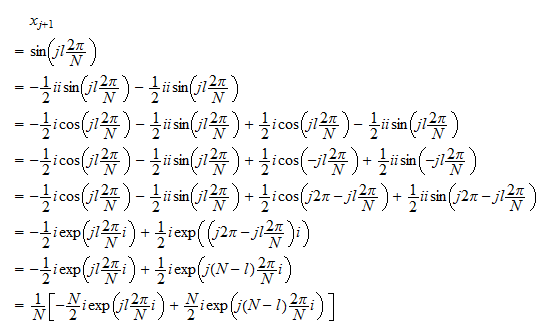 which is a frequency-domain representation of as a linear combination of DFT basis functions. Therefore, the coefficients of the linear combination inside the square brackets are the values of the DFT (see also the previous proof). They are all equal to , except those corresponding to the frequencies and , which are equal to and respectively.

Since the DFT is a linear operator, we can use its linearity to easily derive the DFT of linear combinations of sine and cosine waves.

Example Let and be positive integers, with . Let the entries of be defined byThen, the DFT of is

Let us now analyze the case of a shifted cosine wave:where:

The Discrete Fourier Transform is

We can derive the frequency-domain representation of as follows: 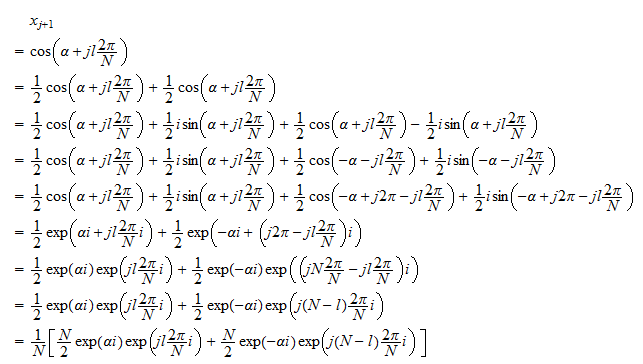 Similarly, we can analyze a shifted sine wave:where:

The Discrete Fourier Transform is

We can derive the frequency-domain representation of as follows:

What happens whenor but the frequency parameter is not an integer?

In other words, what happens when the sine or cosine waves have frequencies that do not belong to the set of analysis frequencies used to compute the DFT?

What happens is that the neat results presented above (DFT is zero everywhere except at the frequencies and ) are no longer valid.

When is not integer, the DFT can be non-zero everywhere, although it tends to be larger in magnitude around the frequencies and . This phenomenon is known as spectral leakage.

Then, we compute the DFT and its amplitude spectrum

The amplitude spectrum, displayed in the next plot, clearly shows that although the amplitudes are large around the and frequencies, there is leakage to all the other frequencies.