The Laplace expansion is a formula that allows us to express the determinant of a matrix as a linear combination of determinants of smaller matrices, called minors.

The Laplace expansion also allows us to write the inverse of a matrix in terms of its signed minors, called cofactors. The latter are usually collected in a matrix called adjoint matrix.

Let us start by defining minors.

Definition Let be a matrix (with ). Denote by the entry of at the intersection of the -th row and -th column. The minor of is the determinant of the sub-matrix obtained from by deleting its -th row and its -th column.

We now illustrate the definition with an example.

Example Define the matrix Take the entry . The sub-matrix obtained by deleting the first row and the first column isThus, the minor of is

The minor of is

A cofactor is a minor whose sign may have been changed depending on the location of the respective matrix entry.

Definition Let be a matrix (with ). Denote by the minor of an entry . The cofactor of is

As an example, the pattern of sign changes of a matrix is

Example Consider the matrix Take the entry . The minor of is

and its cofactor is

We are now ready to present the Laplace expansion.

Let us start by proving the row expansionDenote by the -th row of . We can writewhere is the -th vector of the standard basis of , that is a vector such that its -th entry is equal to 1 and all the other entries are equal to 0. Now, denote by the matrix obtained from by substituting its -th row with : 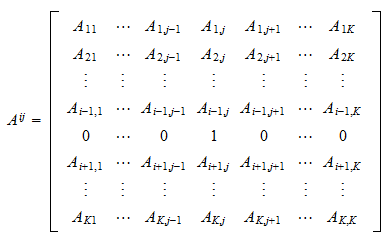 We can write the -th row of as a linear combination as follows:Since the determinant is linear in each row, we have thatNow, the matrix can be transformed into the matrix 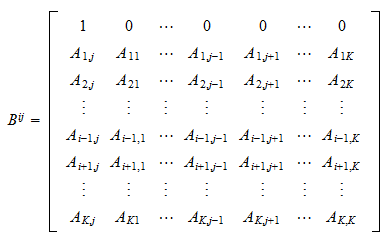 by performing row interchanges and column interchanges. As a consequence, by the properties of the determinant of elementary matrices, we have thatBy the definition of determinant, we have where: in step we have used the fact that transposition does not change the determinant; in step we have used the fact that the only non-zero entry of the first column of is the first one, so that for all and for ; in step , is the minor of , and, by looking at the structure of above, it is clear that, after excluding the first row and the first column of from the computation of its determinant, we are computing the determinant of a matrix obtained from by deleting its -th row and its -th column. Thus, where is the cofactor of . The proof for column expansions is analogous.

In other words, the determinant can be computed by summing all the entries of an arbitrarily chosen row (column) multiplied by their respective cofactors.

Example Define the matrixWe can use the Laplace expansion along the first column to compute its determinant:

Example Define the matrixWe can use the Laplace expansion along the third row to compute its determinant: 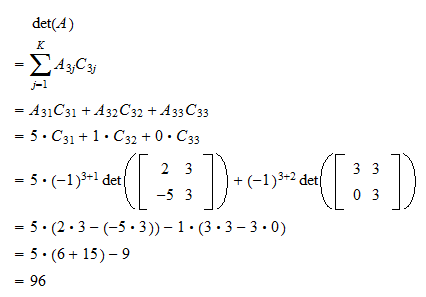 Expansions along the wrong row or column

An interesting and useful fact is that while the Laplace expansion giveswe havewhen . In other words, if we multiply the elements of row with the cofactors of a different row and we add them up, we get zero as a result.

The same result holds for columns:when . The proof is analogous to the previous one.

We now define the cofactor matrix (or matrix of cofactors).

Definition Let be a matrix. Denote by the cofactor of (defined above). Then, the matrix such that its -th entry is equal to for every and is called cofactor matrix of .

The adjoint matrix (or adjugate matrix) is the transpose of the matrix of cofactors.

Definition Let be a matrix and its cofactor matrix. The adjoint matrix of , denoted by , is

The following proposition is a direct consequence of the Laplace expansion.

Proposition Let be a matrix and its adjoint. Then,where is the identity matrix.

When we have which is a column expansion. Thus, by the same arguments used previously, we have that

A consequence of the previous proposition is the following.

Proposition Let be a invertible matrix and its adjoint. Then

Since is invertible, . Then, we can rewrite the resultasThus, by the definition of inverse matrix, the matrixis the inverse of .

Compute the determinant of by using Laplace expansion along its third column. 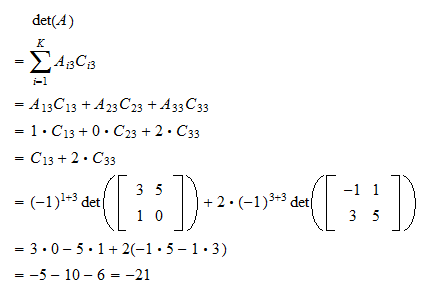 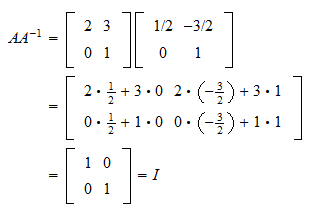